Be Careful…Concrete Weight Dangles From Crane Over NYC Street 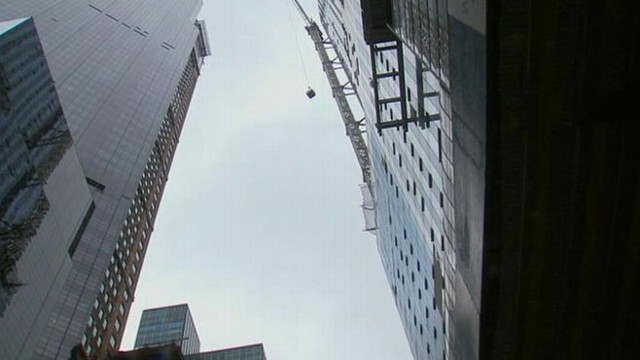 A concrete weight dangled for hours from a crane 40 floors above a street on Monday, leading officials to close a long swath of a major thoroughfare near Carnegie Hall as a precaution until workers finally guided it safely to the ground before the evening rush hour started.

The heavy cube made it to the Manhattan pavement on Monday afternoon after workers spent hours lowering it inch by inch. The crane had been frozen with its load in midair since about 7 a.m., when a generator stopped working, construction field supervisor Mike Lucas said.

The closure on 57th Street created gridlock in an especially bustling area and raised fears that the weight could spiral out of control amid a forecast of strong storms that hit the city shortly after the weight reached the ground. The street reopened to traffic and pedestrians afterward.

The crane was being used in the construction of a luxury high-rise going up near Carnegie Hall. It’s the construction site where a crane’s boom collapsed and dangled dangerously during Superstorm Sandy.

The high-rise was dubbed a “global billionaires’ club” by The New York Times after nine full-floor apartments near the top were sold to billionaires. Two duplexes in the building, called One57, were being sold for more than $90 million each.

The city Department of Buildings likely will look into the incident. It was unclear whether officials might issue any stop-work orders, citations or fines.

Building department records show the crane is owned by Queens-based New York Crane & Equipment Corp. The company is one of the most widely used crane providers in the city, but its equipment has been involved in some notable accidents, including a May 2008 crane collapse that killed two workers on Manhattan’s Upper East Side.

The company and its owner, James Lomma, were acquitted of manslaughter and other charges in that collapse; a mechanic pleaded guilty to criminally negligent homicide.

This January, a rig leased from New York Crane collapsed at a Queens construction site and injured seven workers. The Department of Buildings cited the crane operator, a construction contractor and others, but not New York Crane, in that incident.

The company did not respond to a request for comment on Monday.

A spokesman for the local crane operators’ union, International Union of Operating Engineers Local 14, said leaders were thankful no one was hurt and were awaiting more information on what caused the problem.

Cranes have been a source of safety worries in the city since the May 2008 collapse and another, two months earlier, that killed seven people in midtown Manhattan.

Those accidents spurred the resignation of the city buildings commissioner and fueled new safety measures, including hiring more inspectors and expanding training requirements and inspection checklists.

Another crane fell and killed a worker in April 2012 at a construction site for a new subway line. That rig was exempt from most city construction safety rules because it was working for a state-overseen agency that runs the subway system.