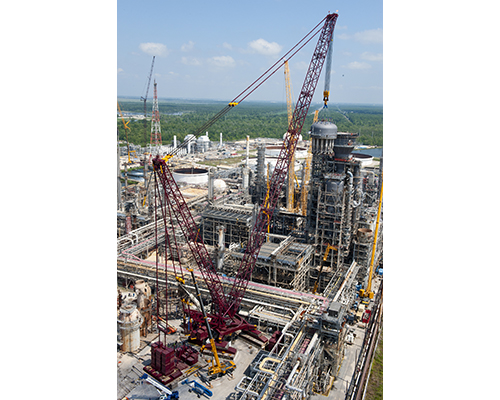 If you’re one of the many Cannon Falls area people working at Flint Hills Resources’ Pine Bend Refinery or even just one of the many people driving by the refinery on Hwy. 52, you’ve been seeing one of the largest cranes in the world at work over the past few months.

Chris Rapp of Cannon Falls, a refinery worker, has been coordinating the operations piece as the crane is being used to replace a regenerator in a fluid catalytic cracker. The unit turns low grade oil into gasoline using catalysts.

Rapp said that in the past when repairs or upgrades were necessary, they would have to send a crew of boilermakers up into the vessel to do the work by hand. Now, he said, with the reach and strength of the crane, they can build a replacement unit on the ground, remove the old unit with the crane, and place the new unit with the crane. This saves in the amount of down time and is safer and better for the boilermakers work, he said. This is about the fourth time Pine Bend has used this crane, he thinks.

Rapp said it is fascinating to see the crews from Deep South Rigging and Crane run the crane, which uses two masts and floating counterweights.

Flint Hills is in the middle of one $400 million upgrade to improve reliability, reduce emissions, and improve conversion at the plant. It has plans for another $300 million upgrades, including some that would allow it to produce about 50 megawatts of electricity (about half of its need) and produce ammonium thiosulfate fertilizer.

The plant has about 1,000 full-time workers and is averaging about 1,000 contract workers a day during the upgrade. The plant can refine about 339,000 barrels of Canadian crude oil per day into gas, diesel, propane, butane and jet fuel. It also produces asphalt, heating fuels and sulfur for fertilizers. The plant opened in 1955.

One of world’s largest crane is part of Pine Bend refinery work in Minny was last modified: May 8th, 2014 by Ron Selby