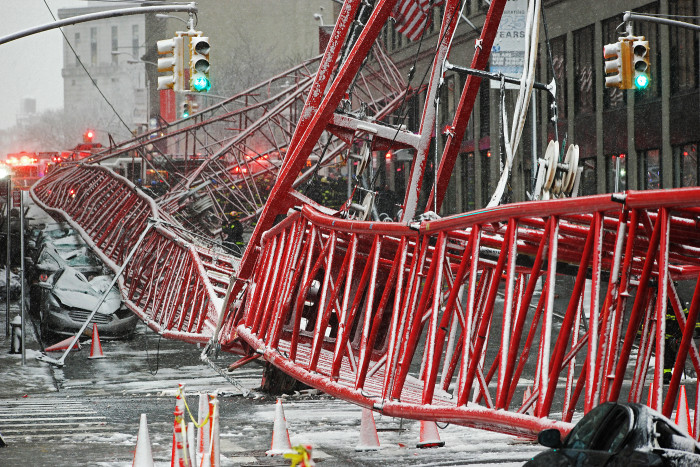 The falling crane killed one person and crushed several cars parked along Worth St. on Feb. 5, prompting new regulations from the city. Photo by Milo Hess

New York CityÂ took the first steps towards tightening regulations of construction cranes and their operators on June 30, implementing several measures designed to prevent collapses like the one that claimed the life of a man in Tribeca earlier this year.

The action by the Department of Buildings follows the recommendations of a crane-safety panel set up in the wake of the Feb. 5 toppling of a crawler crane on Worth St. When the Crane Safety Technical Working Group reported its findings last month, Community Board 1 called on the city to move swiftly to implement the proposed regulations before they could be diluted by push-back from the construction industry.

â€œIâ€™m very pleased that DOB has acted so quickly to adopt some of the recommendations from the working group,â€ said Jeff Ehrlich, a member of the boardâ€™s Tribeca Committee who lives on Worth St.

The new regulations were put into effect at the end of June by order of Department of Buildings Commissioner Rick Chandler, and may be tweaked and refined over the coming weeks as theyâ€™re written into the cityâ€™s construction code, according to a spokesman for the agency.

The new rules include:

â€¢ Requiring contractors to hire â€œon-site lift coordinatorsâ€ with the authority to shutdown crane operations in the event of unsafe conditions.

â€¢ Requiring crane operators to secure cranes when not in use as per a specified â€œwind-action plan,â€ which includes retracted, jackknifed, and laid-down positions.

These regulations are in addition to emergency measures taken immediately after Februaryâ€™s crane collapse, which included banning mobile cranes rated for 20 mph wind gusts or less from operating on public streets, and an increase in fines related to â€œfailure to safeguard cranesâ€ from $4,800 to $10,000, both of which will remain in effect.

Furthermore, the now-mandated on-site lift coordinators will be accountable to unannounced inspections, during which city sleuths will check recorded wind readings at work sites and compare them to the actions of the lift coordinators to ensure operations were shutdown in accordance with the commissionerâ€™s mandate.

A spokesman for the city stressed that additional regulations will likely follow, and that the new rules announced last month comprise measures that the buildingâ€™s department felt could be implemented without new legislation on the part of city council, and which were simple enough to be implemented quickly.

â€œWe will have additional actions to announce in terms of enacting the recommendations that the working group has already made,â€ said Joe Soldevere, â€œbut as the commissioner said, these regulations are solid, sensible and do-able.â€

â€œIâ€™m uncomfortable with a 30-miles-per-hour wind threshold,â€ said Tribeca resident Bruce Erhmann. â€œIâ€™m not an engineer, Iâ€™m basing that on terror â€” on the terror of living on a block where a crane crash destroyed two blocks and killed someone. Thatâ€™s all â€” pure viscera.â€

By Colin Mixson of DowntownExpress.com

NYC clamps down on cranes with new regulations was last modified: July 11th, 2016 by Ron Selby

These Firefighters Could Save Your Life Someday