These Firefighters Could Save Your Life Someday 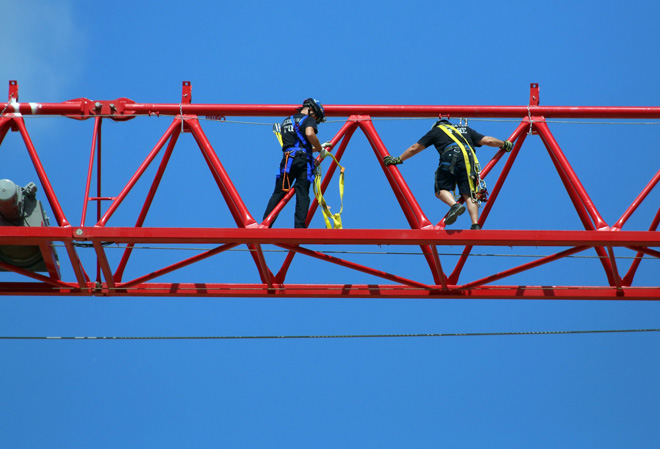 The firefighters walk out on the jib to prepare for the rope rescue drill. (Photo by Eric Albrecht)

Carl Ryan climbed rung-by-rung up the 210-foot crane, knowing the whole time that he would have to come back down.

And on the way down, he’d be dangling on a rope. At times upside down. After attaching someone else to his line.

The Jackson Township firefighter paramedic said the only thing on his mind Sunday as he set one foot in front of the other was safety. Thatâ€™s why he and other members of the department have been training at the site of a $355 million expansion of Mount Carmelâ€™s Grove City campus. 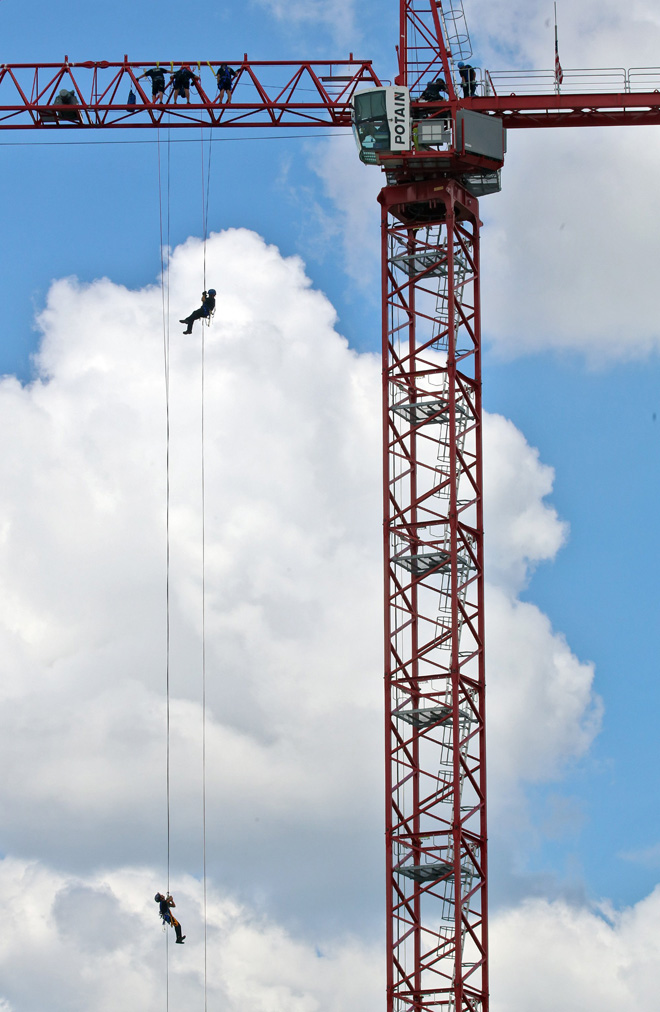 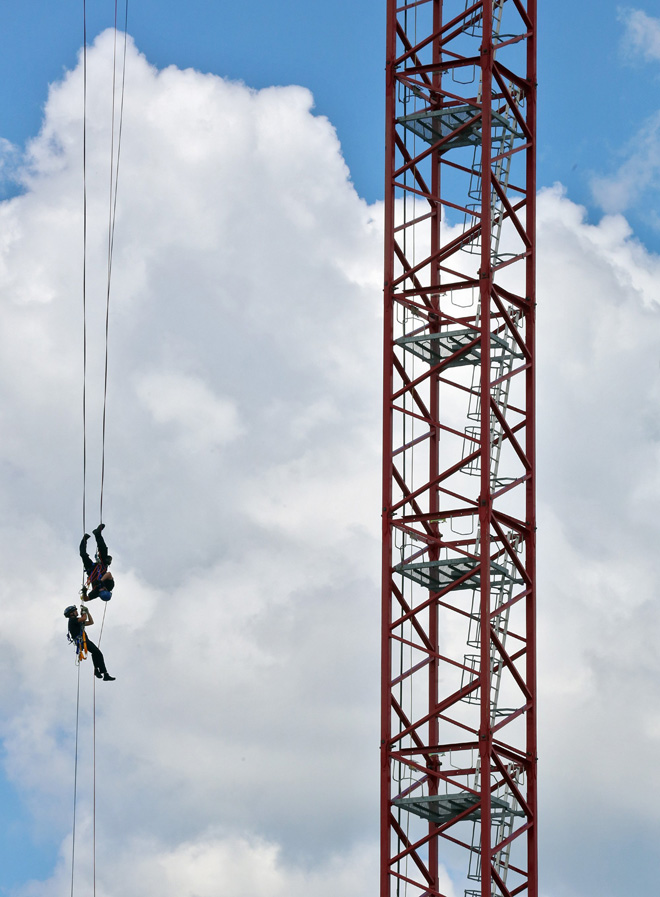 Two cranes â€” one 210-footer and another that stretches to 247 feet â€” tower over the site, arms swinging with piles of rebar and other materials to build the foundation of a seven-story addition to the emergency department. The cranes should be there for another year, and the first patient will use the addition in late 2018.

Should a crane operator have a heart attack at the top, or a trespassing thrill-seeker get tangled in a line, Jackson Township fire would be called to action to rescue them. 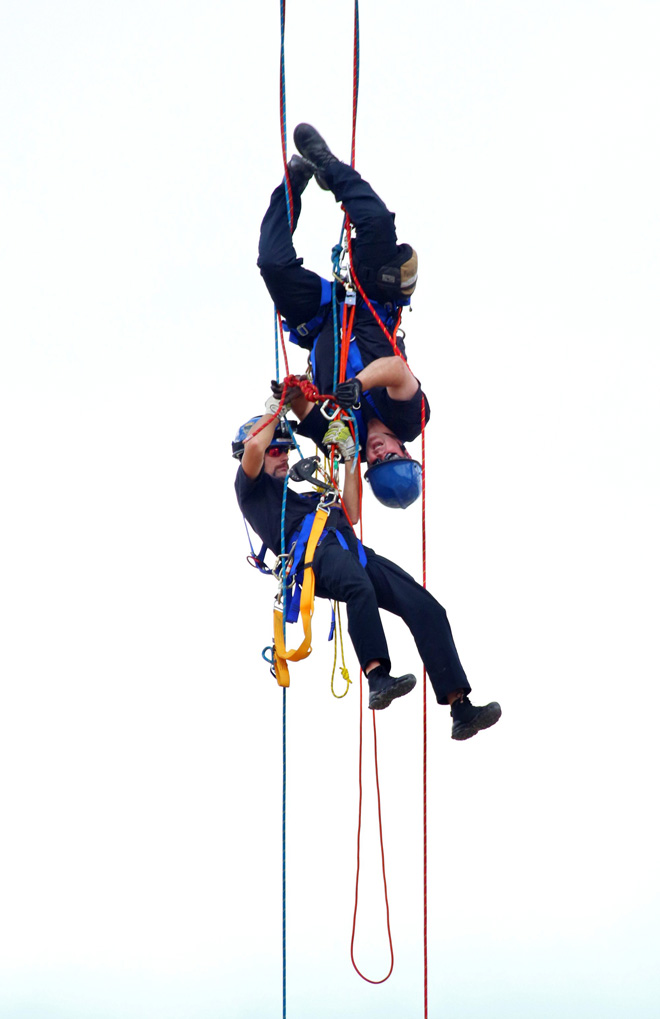 Firefighter Carl Ryan works to secure Josh Hammond from the top during the rescue drill. (Photo by Eric Albrecht)

Jackson Township’s department has about 30 people on staff who are certified to rappel on ropes, and about half of them are trained in different rescue techniques, said Bob Schneider, a firefighter paramedic who also is a member of a central Ohio strike team trained to rescue people stranded in high spaces.

The township has several high spots where they might have to use the training, including a water tower and cellular towers, he said. In the spring, the two cranes were added to the skyline.

â€œThese skills and techniques are useful. Theyâ€™re not used every day,â€ he said. â€œThe things we do less, we need to train on more.â€

The rescue team ran through several scenarios Sunday, including one where they had to lower an incapacitated victim from the top in a basket.

Ryanâ€™s job was to rescue someone who had broken into the site and dangled on a rope off the side of the craneâ€™s arm. Last year, a video posted on the Internet showed someone doing just that on a crane in downtown Columbus.

The construction company already has taken additional security measures to keep people off the cranes after a few break-ins. 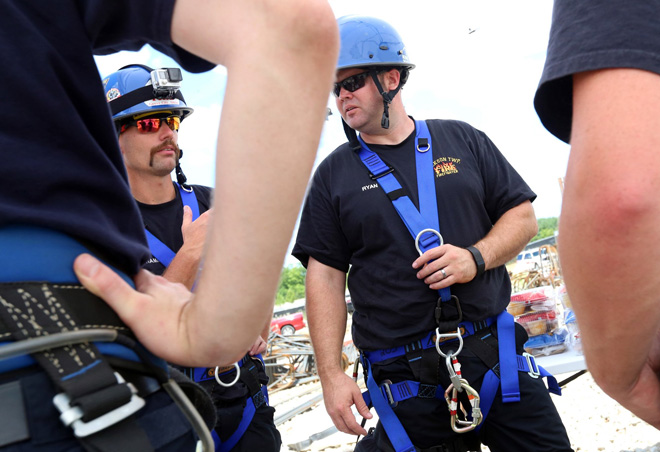 Ryan lowered himself down his own rope alongside another firefighter, Josh Hammond, who was playing the stranded victim. A few feet before Ryan reached Hammond about 100 feet above the ground, he flipped on his rope so that he stared straight at the ground.

With his legs wrapped around both his rope and Hammondâ€™s, he attached Hammondâ€™s harness to his own rope so that he could lower both of them safely to the ground.

â€œThat height, thatâ€™s my first time,â€ he said. â€œWeâ€™ve already had thrill seekers come up here. We needed to figure some things out.â€

Originally Published by the Columbus Dispatch

These Firefighters Could Save Your Life Someday was last modified: July 12th, 2016 by Ron Selby