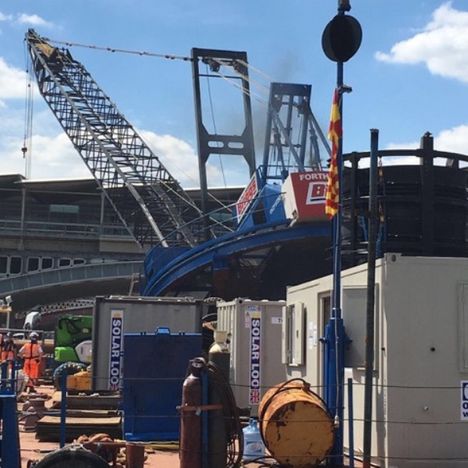 A crane working on a barge in London, almost overturned yesterday when something caused it to tilt forward precariously.

We only have a few details at present, but it seems that the Manitowoc 4000 Ringer mounted on the Forth Olympian barge, which is owned and operated by Briggs Marine, suddenly tipped forward, with the boom looming towards Battersea Bridge. Thankfully it came to a rest with the back end of the ring well clear of the deck at an angle of around 30 degrees and then crashed back down onto the deck.

As far as we know no one was hurt and damage appears to be minimal, although reports now say that the new boom appears to be twisted.

The Manitowoc 4000 Ringer tipped forward, but thankfully did not overturn completely

We understand that prior to starting this job on the new Thames Tideway Tunnel project, the Manitowoc crane was fully refurbished, with a new boom and back mast. We assume that work has stopped while the crane is stabilised and investigation ensues? The crane was working for VolkerStevin which is managing this part of the contract.

We understand that the boom luffing hoist brake slipped, possibly taking the piling hammer that it was lifting – said to be in the region of 68 tonnes – out of radius, the emergency locking pawl would have kicked in adding a dynamic loading. If reports that we have received are correct the hammer hit landed on the river bed stopping the crane from tipping any further.

It should be stated that this update is based on information from a witness and has not been corroborated by a second source and as such should be treated as such.