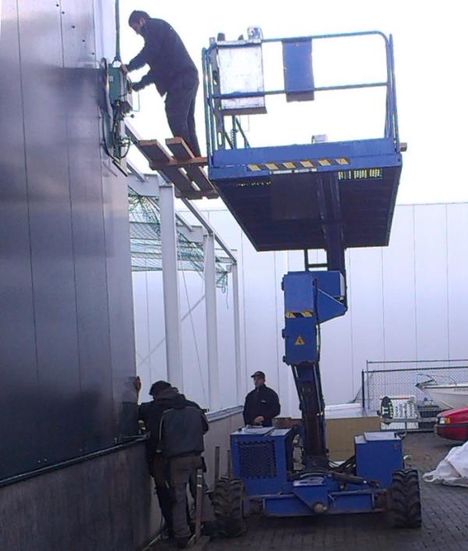 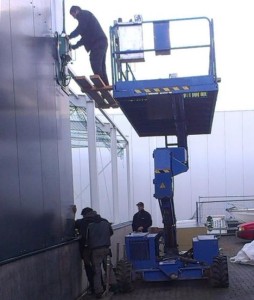 A side mounted platform extension spotted in Steenbergen, The Netherlands

The men using the lift, a 26 or 30ft UpRight SL26RT/SL30RT, had attached a wooden side mounted lateral platform extension in order to obtain some outreach in order to reach over some sort of track and get closer to the faÃ§ade of the new building to install cladding panels.

Where to begin? Well while some ingenuity has been used to create, or rather attach the platform, it has no guardrails or safety elements of any kind â€“ getting out on to it – or off – would not be the safest of manoeuvres. Probably more importantly though the machine is not designed to take the side loadings being inflicted.

If our man above fell from his perch there are posts below that he would likely land on, which could easily impale him, unless he landed on one of his co-workers first of course!

To quote our correspondent: â€œOne of my colleagues noticed and took the attached photographs this week in Steenbergen, a small town in the south-west of the Netherlands. The men on â€“ or rather alongside – the scissor lift even allowed my colleague to take the pictures because he was so proud of his â€˜extensionâ€™. However he didn’t want to hear any talk about any of the dangers or risks.â€

â€œNotice the way that they secured the extra platform to the machine. The lift is owned by a Dutch rental company. We informed them about this scissor lift abuse, but do not know if or in what way they reacted.â€