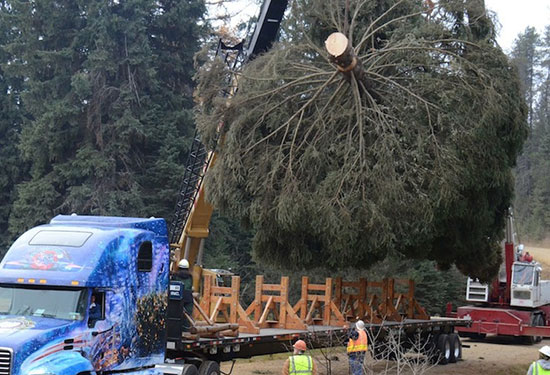 The tree was held upright by huge cranes during the cutting process to prevent damage to limbs were it allowed to fall. It was then gently lowered to the waiting truck having never touched the ground. It was viewed later that day in the nearby town of Newport, Washington, but then was wrapped for protection before its journey to Washington, D.C. The trip would first take it to Seattle, then southward through Utah to as far south as Dallas, Texas before heading northeast to its final destination. 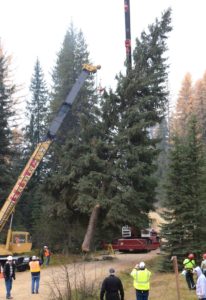 Since 1969, Hite Crane and Rigging has been providing hoisting and rigging Â services throughout the Inland Empire and Pacific Northwest. With a fleet of hydraulic and conventional cranes from 10 toHITE Crane and Rigging, Spokane, Washington, We take pride in doing the difficult. 440 tons, we are sure to have the correct machine and crew for all your hoisting needs. We offer machinery moving, pile driving, heavy hauling and more. Our staff of nationally certified operators, ironworkers, and millwrights can help you take your project from concept to completion…on time, and on budget. Anytime, anywhere, one call does it all!
Hite Crane & Rigging, Inc. readies tree for US Capital. was last modified: November 4th, 2013 by Ron Selby