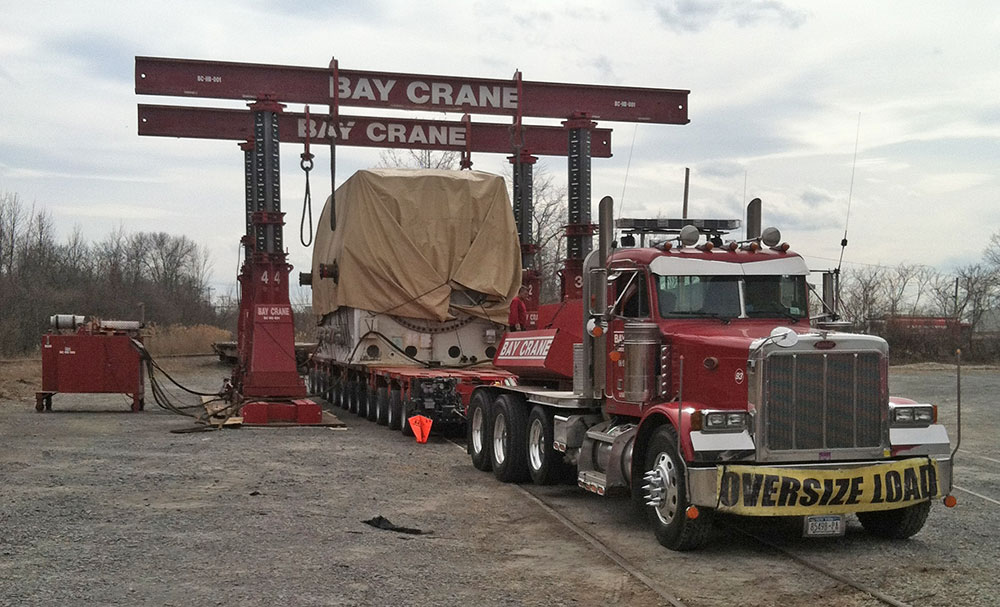 SCHENECTADYÂ â€” This is not a piece of equipment you slide onto a pickup truck bed or stack in a delivery van.

It takes a crew of more than half a dozen, a train and a flatbed trailer with 96 tires being pulled by a 16-wheel truck. It takes state police inspections and planning and clear roads and skies and a commute of a couple of miles that will take a couple of hours.

Eventually, the generator stator, all 220 tons of it, will reach its destination at the GE Learning Center in Niskayuna. That day was not Monday, as workers spent hours affixing a harness to lift the equipment off a sidelined train car by Maxon Road to the truck.

It wonâ€™t be today, not with the weather calling for slick roads. Wednesday, if it goes as planned â€” and there is a lot of planning here â€” is the day.

General Electric is moving a stator (the stationary portion of an electric generator) from the rails to a 96-wheel trailer along Maxon Road Ext. in Schenectady on Monday.

For Tony Polizzi, the project manager for Bay Crane, the New Jersey transportation specialists who have worked on big-steel moves ranging from the Freedom Tower to the Bayonne Bridge, this is just another Monday at the office.

â€œThis is normal â€” normal, normal, normal,â€ he said, as workers installed bolts the size of a forearm to fasten a device just to lift the generator off the rail car so it could be placed on the trailer. That said, the crew is meticulous in checking and double-checking a winch that will be used; there is no option that involves a lack of precision.

Meanwhile, driver Glenn Loiacono waited by his truck and trailer â€” a combined 95 tons â€” as a state police inspection crew went over every inch. You donâ€™t get to just drive 300-plus tons down the street without a bunch of permits and approvals. He estimated the trip â€” roughly four miles â€” will take a bit longer than the normal eight-minute commute.

Despite its massiveness, the generator is not complete: Rotors, each tens of thousands of pounds, will have to be shipped. â€œTogether they will be used to train GE service engineers,â€ GE spokeswoman Chris Horne said.

Just getting the equipment there is an engineering feat unto itself.