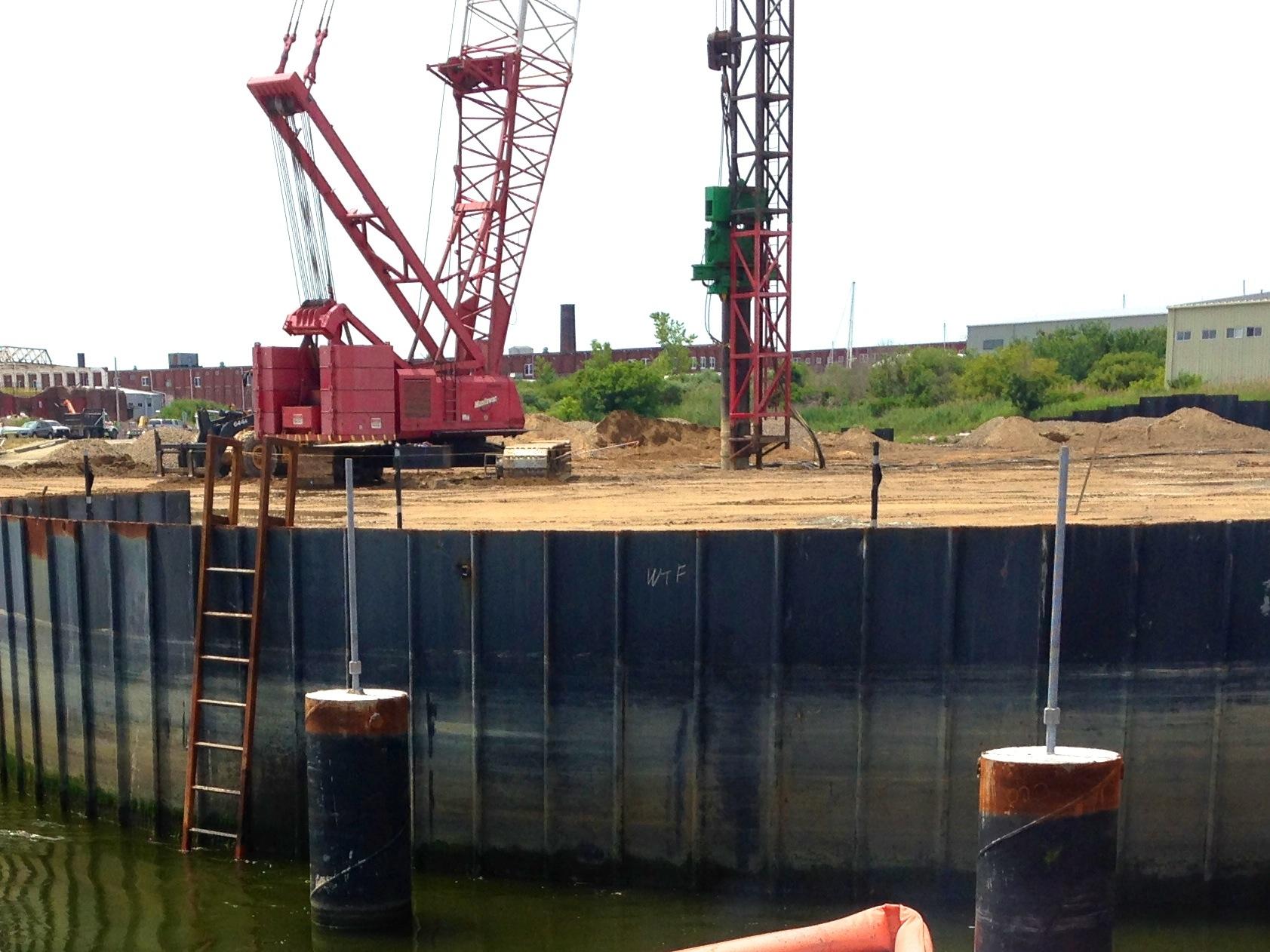 Since the project broke ground in April, 2013, the steady pounding of pile-drivers and the din of crane engines have filled the air at the site along New Bedfordâ€™s harbor. City officials said construction should be complete by December â€“ but itâ€™s hard to tell.

Reporter: â€œWeâ€™ve backed up right now to the Marine Commerce Terminal as itâ€™s progressing in its construction. And I have to say it doesnâ€™t really look like much. The cofferdam is now completed â€“ and thatâ€™s the large bulkhead that sits at the front of this property. The rest of it is just a lotta trucks around, some cranes, piles of crushed rock, and not a lotta people working here today, for whatever reason.â€

Close-up of cofferdam and Manitowoc crane

Looking out at the construction site, New Bedford Mayor Jon Mitchell said itâ€™s the structure underneath that counts. He said the terminal is built to hold the extremely heavy components that the wind industry will produce.

â€œWeâ€™re talking about 900-ton foundations and 300-ton towers,â€ Mitchell said. â€œSo people have a sense of it, if you look out at, say, the windmills in Falmouth or Fairhaven, offshore windmills will be about a third taller than those, and the blades much larger.â€

The problem is, the terminal isnâ€™t finished yet. But then again, either is Cape Wind. The effort to install 130 wind turbines in Nantucket Sound is still facing legal challenges. Itâ€™s also still putting together its financing. So itâ€™s hard to say exactly when the first turbine foundation would be driven into the sandy bottom of Nantucket Sound.

Mayor Mitchell said that a contract with Cape Wind had not yet been signed yet, but when Cape Wind is ready to go, so will New Bedfordâ€™s new marine terminal.

But what if Cape Wind is ready and the marine terminal isnâ€™t? Quonset Development Corporation in Rhode Island said Cape Wind has a tentative agreement with them to lease 14 acres in North Kingstown, as a staging area to build its 130-turbine wind farm.

Cape Wind spokesman Mark Rogers released a statement saying the Rhode Island site is only one part of what he called Cape Windâ€™s â€˜overall port strategy.â€™

The statement seems to leave the door open for using the New Bedford terminal at some point, if by chance the terminal is not operational when Cape Wind is ready to go.

Gerard Dhooge, president of the Boston/New England Maritime Trades Council, said thereâ€™s no doubt New Bedford will be ready. He said about 150 people already are working on the site, and heâ€™s optimistic Cape Wind will mean even more jobs â€“ although just how many is unclear.

â€œWeâ€™re waiting for word from Cape Wind officials, and the Weeks-Manson officials, who are the construction managers,â€ said Dhooge. â€œWe are just starting the process of negotiating a project labor agreement with them, and awaiting the signing of the final financial agreements by Cape Wind and by Weeks-Manson. But weâ€™re expecting that by the end of this year weâ€™ll have all that in place.â€

Thereâ€™s a lot riding on the facility, but also a lot of opportunity. In the near future, not only is Nantucket Sound expected to host offshore wind turbines, but other projects are being considered off Rhode Island, and in federal waters south of Marthaâ€™s Vineyard.

And when the renewable energy winds arenâ€™t blowing, Mayor Mitchell said the Terminal has other uses.