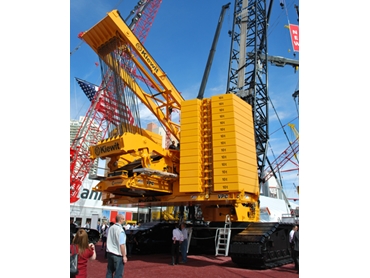 Thereâ€™s a couple of brand new cranes on the scene this year, and it looks like a game-changer.

Manitowoc have been leading the way in mobile, luffing pin-jibs for some time, but a simple idea due to be shown off at CONEXPO 2014 is going to make a big splash in the construction game.

Two new cranes, the MLC300 and MLC650, are equipped with a wholly unique feature that Manitowoc calls Variable Position Counterweight, or VPC.

The idea is as simple and self-explanatory as the name, but the implications are massive, and could completely change the expectations that cranes and rigging co-ordinators put on set-up time and ground space requirements.

In short, the craneâ€™s counterweights are mounted on a track so they can slide backwards and forwards, and all of this takes place automatically, in response to changes in the angle of the boom.

The advantages of this system include reduced ground preparation, lower ground-bearing pressure and less counterweight to carry around without sacrificing capacity.

Ultimately, crane technicians will not have to transport or install as much counterweight as usual, compared with a traditional configurations.

In fact, aside from the transport costs, and the cost of the counterweights themselves, there is also a massive saving in the amount of time needed to change the counterweight configuration.

Rather than removing or loading up on counterweights to suit a particular lift, the VPC simply adjusts itself to suit the lift, which saves on time, reduces the risky handling of counterweights, the amount of labour require to complete the changes, while maximising the capacity of the crane beyond what could be achieved with traditional counterweight configuration.

With interchangeable left and right side counterweights, the counterweight boxes are also designed to be common across multiple crane platforms.

â€œThis new technology will have a significant impact on the lifting industry, as it enhances crane capacities, reduces mobilization time on the job site, and in the end, saves customers a significant amount of time and money.â€

One of the largest cranes in North America at the Humboldt Mill, MI