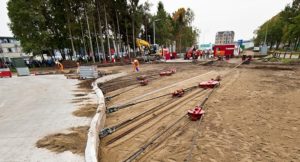 Mammoet slides prefab roundabout into place in one go.

An entire prefab roundabout was recently installed by Mammoet, in cooperation with BAM Infra. The project was carried out following a commission by the Dutch province Noord Brabant as part of a new ring road to the southeast of the village of Gemert. The roundabout is connected to an existing road often used by school children on bicycles. By constructing the roundabout off-site, the village was able to avoid months of traffic diversions and congestion.

While Mammoet uses the concept of sliding prefab pieces into place on many tunnel and bridge construction projects, the company had never applied it to a roundabout. Along with BAM Infra, Mammoet developed a solution to move the 52-meter-wide, 1,300-ton roundabout by pulling it to its final destination. The unit slid over steel beams, which acted as a guide rail system.

The prefab roundabout was slid into place and connected during a school holiday, when there were fewer cyclists on the road. A connecting road was also closed for the move. Once the site was prepped, Mammoet was able to move the roundabout in approximately six hours. The connecting road was opened later that week.