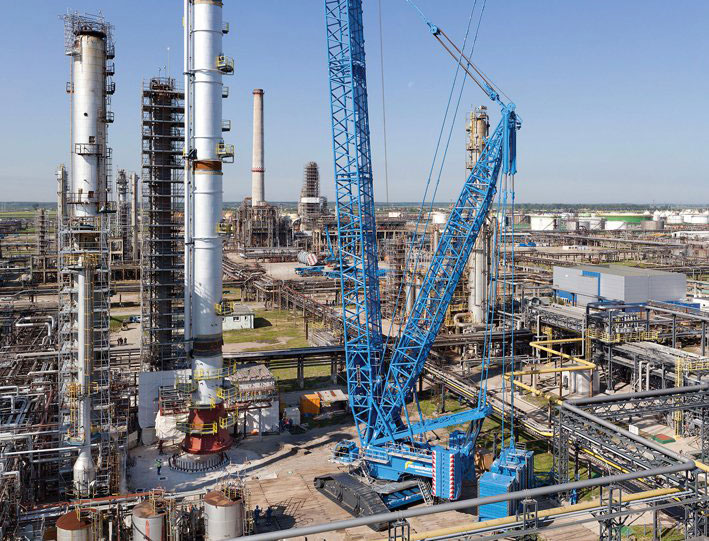 Liebherrâ€™s new 1,000-ton capacity crawler crane, the LR 11000, has been in operation for the first time since beingÂ  unveiled to the public at the Bauma show last year.

The crane â€“ the latest addition to the fleet of Austrian heavy-lift contractor Felbermayr â€“ was delivered direct from Liebherrâ€™s factory in Ehingen to the Petromoil refinery in Plojesti, near the Romanian capital Bucharest.

Here, the crane was used to lift a series of massive steel vessels into position as part of a modernisation project at the plant. Manoeuvring and installing these huge steel cylinders (the largest of which measured 58m long by 4m in diameter and weighed 335 tonnes) was made especially challenging by the severe lack of space and the fact that the plant continued to operate throughout.

Nevertheless the LR 11000 might have been designed for this job â€“ in fact it probably was: the new products brochure printed for circulation at Bauma 2013 described the new machine as â€œideal for constricted conditions in refineriesâ€. The job therefore exploited many of the special features of the new crane, including the fast-action assembly of the central crawler section. This assembly is designed so that it is connected â€“ together with the slewing ring â€“ to the slewing platform with just four bolts. The craneâ€™s compact design helped maximize the limited space available for erection and operation of the machine. For example, the suspended counterweight ballast can be brought in to within 12m of the main undercarriage to reduce the slewing radius, says Liebherr.

All of the crane components had to be brought to the erection site through an alleyway just 5m wide. Existing pipework, including pipe bridges spanning the access route, made for a challenging erection process. The crane components were assembled with assistance from one of Felbermayrâ€™s other Liebherrs, a 250t-capacity LTM1250 6.1 telescopic. It took six days to erect the big crawler and rig its 36m luffing jib and over 700 tonnes of counterweight in a space measuring just 35m x 35m.

The next challenge came with the lifting of the huge cylinders. The largest unit had been calculated to weigh something in the order of 280 tonnes â€“ but its fabrication was delayed and was completed against the clock even as the LR 11000 was being rigged.

Last minute design changes meant additional components were added to the cylinder and the actual final weight of the load could not be ascertained until the lift commenced. Using a 750t-capacity LR 1750 crawler to toe-in the unit and help control it as it rotated from horizontal to vertical orientation, Felbermayrâ€™s LRÂ 11000 slowly hoisted the unit until it was fully suspended. Then the final weight was revealed: 335 tonnes â€“ a massive 55 tonnes overweight.

Felbermayrâ€™s crane operator, Stephan Kraus, was confident that the big crawler crane could complete the lift in its existing configuration â€“ an opinion confirmed by specialist Dutch consulting engineer Euro-Rigging.

The smaller LR 1750 tracked forward 49m as the LR 11000 raised the load into the vertical. The main crane then lifted the vessel out to a radius of 27.5m while slewing into position. In the process, the crane had to hoist the load to a maximum hook-height of around 80m to clear obstacles on the ground.

Had it not been capable of reducing the radius of its massive ballast pallet by 2m to just 13.5m, the crane would not have been able to slew within the confined space. â€œFor its hoisting capacity the crane is incredibly compact,â€ says Kraus. Klaus Ruhland, Felbermayrâ€™s project planner,Â explains that this new Liebherr was the only machine capable of offering this kind of lifting capacity within such narrow confines: â€œThe alternative crane which could have hoisted this component would have been a Terex CC 6800,â€ says Ruhland. â€œBut there was definitely not enough space for it. The LR 11000 was driven into the space almost by magic.â€

The big Liebherr remained on site at Plojesti until the end of July, when the site was shut down for a general overhaul and the LR 11000 dismantled and removed. But this isnâ€™t the end of the job for Felbermayr: the overhaul works are extensive and Felbermayr is mobilising a fleet of around 70 mobile cranes to carry out all the lifting. 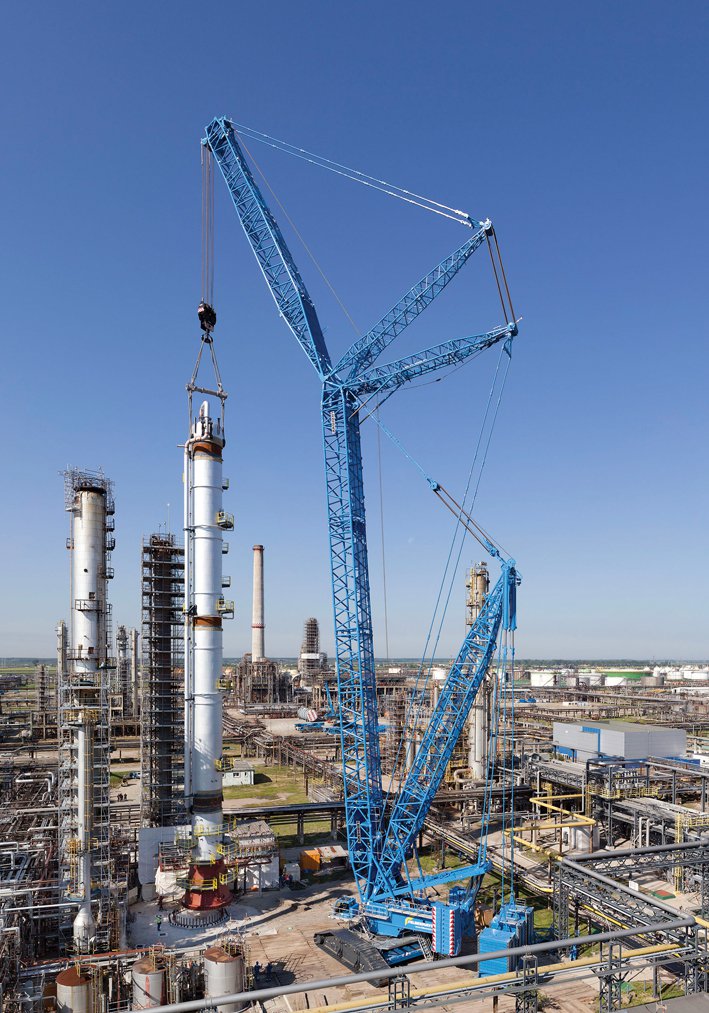