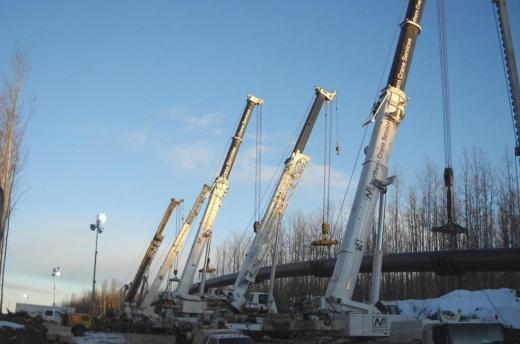 The U.S. subsidiary ofÂ NCSG Crane & Heavy Haul CorpÂ has boughtÂ substantially all of the assets ofÂ H&H Crane Service Inc, aÂ supplier of fully operated and maintained crane services located in Great Falls, Montana. The value of the acquisition was not disclosed. As part of the deal,Â Tom Harant, founder of H&Hâ€™s parent company, has taken an ownership interest in NCSG. Based in Edmonton, NCSGÂ is a crane and heavy haul business backed by Canadian private equity firmÂ TriWest Capital PartnersÂ and U.S. investorÂ NCA Partners. TriWest led a majorityÂ investmentÂ in the company in June 2014.

H&H Crane Serviceâ€™s parent company was founded in Great Falls, MT in 1987 by Tom Harant. The company is the leading supplier of fully operated and maintained crane services in Great Falls. The State of Montana is currently experiencing substantial economic growth and is the location of a number of proposed wind farms, proposed refinery expansions, and home to the western portion of the Bakken oil shale.

â€œH&H has a proud 27 year history of providing fully operated and maintained crane and lifting solutions to its many customers in the Great Falls region and we are thrilled to be partnering with Tom Harant and the rest of the H&H team going forward,â€ said Ted Redmond, President of NCSG. â€œWe will continue to provide crane services to the Great Falls market and plan to grow our crane and heavy haul fleet in this market to meet the needs of current customers and the proposed projects in the region.â€

As a part of the transaction, Tom Harant has taken an ownership interest in NCSG, and intends to work closely with NCSG to grow the crane and heavy haul services business in the Great Falls region. â€œI will continue to run the business and NCSG / H&H CRANE will continue to provide our long term customers with fully operated and maintained crane and lifting services and we will enhance these services with additional equipment from NCSGâ€™s crane and heavy haul operations,â€ said Tom. â€œWith access to NCSGâ€™s team of 700 employees and fleet of over 290 cranes, 235 lines of hydraulic platform trailers, 300 conventional trailers and specialized rigging services such as jack & slide and hydraulic gantries, NCSG / H&H CRANE will be able to take on larger projects/maintenance jobs and meet even more of our customersâ€™ rigging, lifting and heavy haul needs.â€

NCSG was founded in 1987 and is owned by an investor group led by TriWest Capital and including NCA Partners and management. Over the last 8 years NCSG has completed 10 acquisitions and grown at a compound annual growth rate of approximately 25%.

NCSG, based in Edmonton, Alberta, is one of the largest crane and heavy haul companies in North America. NCSG provides rigging, lifting and heavy haul services throughout the North American North/South Energy corridor. In the U.S., NCSG now has branches in Soda Springs, Idaho; Great Falls, Billings and Sidney in Montana; Williston and Dickinson in North Dakota; and Odessa, Texas. In Canada, NCSG has branches in Prince Rupert, Terrace/Kitimat, Fort St. John and Tumbler Ridge in British Columbia; Calgary, Drayton Valley, Leduc/Nisku, Edmonton, Fort McMurray, Grande Prairie, Wabasca and Bonnyville in Alberta; and Regina in Saskatchewan. NCSG has a diverse fleet of over 290 cranes and picker trucks, ranging in size from 8 to 1350 tons as well as a highly specialized heavy haul tractor and trailer fleet servicing the refining, oil sands, upstream oil and gas, LNG, mining, infrastructure, commercial and wind/utility industries.

Singapore Cracks Down on Crane Operators