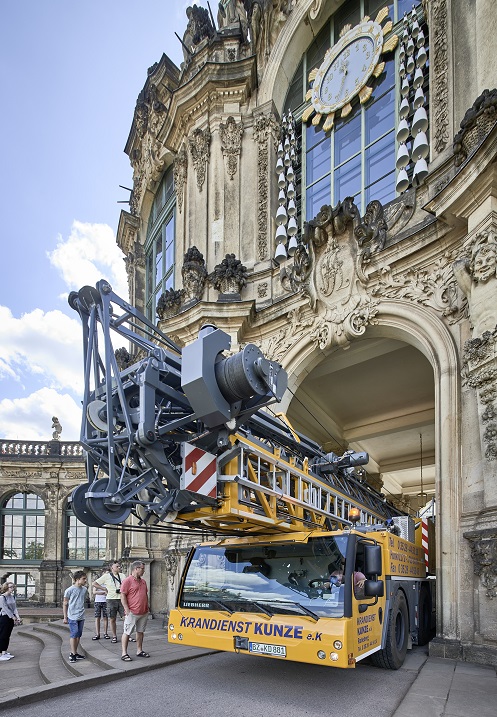 In the summer of this year, the MK 88 Plus Liebherr mobile construction crane, supplied by Krandienst Kunze e.K., was used to give one of Dresden’s most famous city centre building a new lease of light: the roof of the Semper Gallery received new glass panes.

Impressive in a tight spot

“It was pretty close. Any tighter and my mirrors would have had it,” says crane operator Christian Jahn, grinning. He drove the MK to the site with confidence. However, the approach did become particularly challenging at one point: the thoroughfare to the Semper Gallery was only a few centimetres wider than the mobile construction crane itself. The only possible access route was through the gate of the Glockenspiel Pavilion, the main city entrance. But, with plenty of skill and experience as well as the help of the undercarriage’s steering programs, Christian Jahn guided the almost 16-metre-long crane safely through the entranceway. This was watched by astonished tourists, for whom the spectacle was definitely something out of the ordinary.

Having arrived in the Dresden Zwinger’s courtyard, assembly of the MK 88 Plus began straight away in the closed-off construction site area. Once again, the crane stole the limelight from the monumental building. Visitors and construction crews were mesmerised as the MK unfolded by a simple touch of a button – at a 30° luffed jib position to a hook height of over 50 metres. Unfortunately for those watching, the event didn’t last long as the MK 88 Plus was assembled from its supported state in just 17 minutes. The crane was ready for work at 11 o’clock on the dot.

The Semper Gallery, built in 1854, has been undergoing a two-stage complete renovation process since 2013. As well as commissioning Krandienst Kunze e.K. as a general contractor for all crane services, the state-owned company Sächsische Immobilien- und Baumanagement GmbH also commissioned AGS Montagen GmbH, who took over the replacement of the windows. The individual glass components were safely put into place with the aid of a special glass manipulator attached to the hook of the crane. It was above all else the Micromove fine positioning mode of the Liebherr mobile construction crane that proved to be of invaluable support. Using this mode, the window panes could be placed with millimetre precision and conveniently via remote control.

Remote control operation of the crane was especially important to Ray Bienert, Installation Team Leader at AGS Montagen GmbH. In contrast to other lifting solutions, the crane operator was able to stand directly next to the assembly team and was therefore able to clearly observe the pick and set points of the glass panes. At approx. 1.2 x 0.7 metres in size and weighing 45 kilograms, the glass elements were comparatively small. Nevertheless, absolute attention was called for. “By the second pane we were already working as an established team, the crane operator and us,” says Bienert and then adds, “But the speed with which we were able to work was also fantastic. It takes twice as long with other crane systems. We enjoy working with mobile cranes like the MK.” After one and a half hours, all glass panels had been replaced. A couple of building material loads later, the crane left the Zwinger the same way as it had arrived.

Dirk Kunze, from Krandienst Kunze e.K., is not only impressed by the operation at such a historic site but also by the MK itself. “The crane has been part of our fleet since 8th April of this year and both my operators are really happy with it.” He sees the acquisition of the crane as a decision well made as he is able to offer his customers completely new services alongside those of his existing mobile cranes. He especially appreciates the fact that the crane is quickly operational, “Changing location is much quicker with an MK. A real taxi crane to keep things moving,” says the crane company owner from Radeberg.