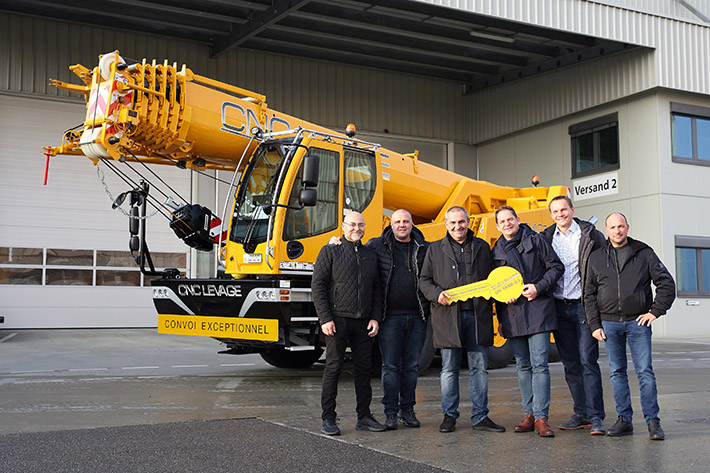 Corsican crane contractor CNC Levage took delivery of a new Liebherr LTC 1050-3.1 compact crane in November. It will replace an LTC 1045-3.1, which the company bought in 2011, to supplement its fleet for crane jobs in particularly constricted conditions.

The island of Corsica is dominated by mountainous landscapes, narrow, winding roads and twisting alleys in small villages and historic old towns. These are precisely the conditions which Liebherr’s compact LTC cranes are designed to handle. Nicolas Allegrini, the owner of CNC Levage says: “Eight years ago we purchased the LTC 1045-3.1 to supplement our LTM cranes. As we were very satisfied with it, we decided to replace it with its successor, the LTC 1050-3.1”.

CNC ordered the new crane with the VarioBase® variable support base, an elevating cab and a remote control. “The LTC 1050-3.1 is as flexible as a Swiss penknife. We can use it to cover a very wide range of different hoisting work”, explains Allegrini.

Safety is an important criterion for CNC. For example, VarioBase® enables the crane to carry out hoisting work which is secured by the load moment limit, even if the outriggers for the crane supports cannot be fully extended on constricted sites. The elevating cab and remote control also enhance safety as they improve the visibility of the site situation.

CNC Levage was founded in 2008 as the Crane Division of Chantier Naval de Calvi (CNC), a company which trades in sport boats and yachts. CNC also provides maintenance and repair services for ships. Mobile cranes have always been required to handle boats. CNC Levage currently operates 16 cranes and is now the largest crane contractor in Corsica. Its crane work is no longer restricted to the company’s own requirements and it now provides services all over the island. CNC Levage’s fleet consists exclusively of Liebherr mobile cranes. The largest is the 300-tonne LTM 1300-6.1. Its fleet also includes two MK 88 mobile construction cranes. An LTR 1100 telescopic crawler crane, an LRT 1100-2.1 rough-terrain crane and LTM 1090-4.2 and LTM 1230-5.1 mobile cranes were added to the fleet during 2019. Allegrini continues: “We have a long-standing partnership with Liebherr. We are delighted with its crane technology. We can also count on the good after-sales service provided by its French subsidiary, Liebherr Grues Mobiles. That is particularly important for us, a company based on an island”.