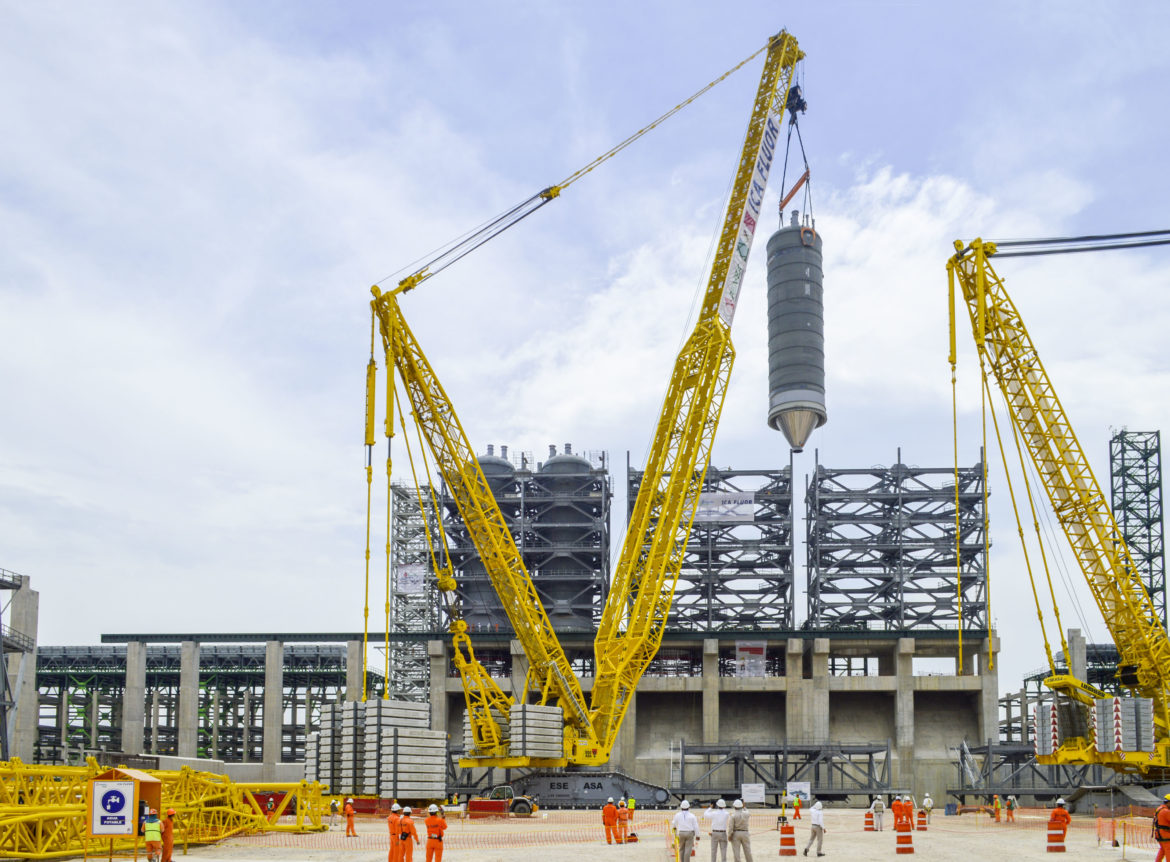 In Tula, Mexico, the Miguel Hidalgo oil refinery is being modernized by construction contractor ICA Fluor. To do the heavy lifting, Mexican crane contractor ESEASA is using three Liebherr crawler cranes, one of which is the largest conventional crawler in the world, the LR 13000. When work is complete by the end of 2018, the refinery will be able to produce up to 110,000 more barrels of pure petrol and diesel.

The crane work at the refinery comprised hoisting six tanks into position. Each tanks had a net weight of 680 tons (620 tonnes) and had to be hoisted to a hook height of 135 feet (124 meters) with a radius of 59 feet (54 meters). In a configuration with a 144-foot (132-meter) main boom, including PowerBoom and the derrick boom together with 1,900 tons (1,725 tonnes) of ballast, ESEASA’s Liebherr LR 13000 crawler crane managed to complete the work with plenty in reserve. The Liebherr LR 11350 crawler crane was also on site and helped with a tandem hoist to place the tanks in an upright position. A Liebherr LTR 1100 telescopic crawler crane removed the transport device from the tanks after they had been placed upright.

In the future, the tanks will be used to store the carbon produced during the production process at the refinery. The tanks were manufactured in Spain and transported to Altamira in the north of Mexico by ship. They then traveled almost 620 miles (1,000 kilometers) through six states on their way to Tula. A number of bridges, overhead cables, toll booths, and signs had to be removed or modified to transport the tanks by road, a job which was also carried out by ESEASA.

Among its fleet, crane rental company ESEASA based in Mexico City has two LTR 11200 cranes, five LTM 11200-9.1 machines and one LR 11350 as well as an LR 13000 from Liebherr. The company mainly works in the energy sector (wind power and oil industry) and has specialised in engineering, logistics and crane assembly for large projects in Central America and the USA. Liebherr Mexiko S. de R.L. de C.V. was founded in 2013 and is responsible for sales and service of mobile and crawler cranes in Mexico and Central America.