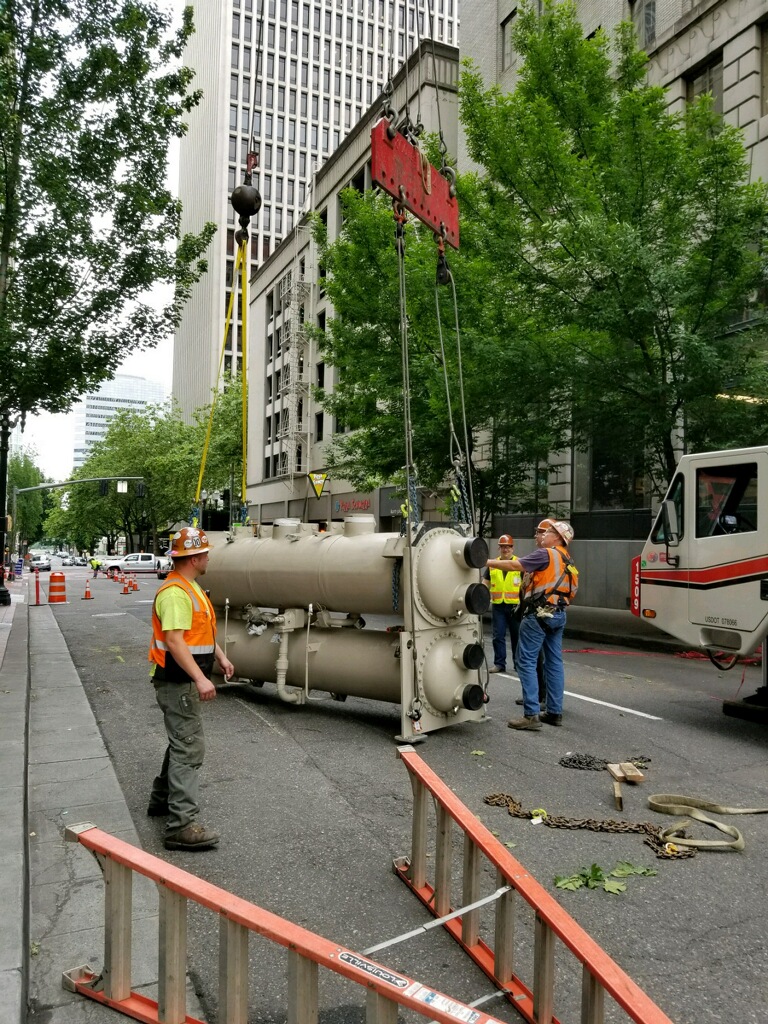 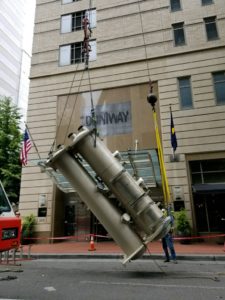 Engineered lifting points were added to rotate the chiller.

The 15-story Public Service Building is a familiar site in downtown Portland, Ore. Built in 1927, it claimed the title of the city’s tallest building until the 1960s. It originally housed the offices of the Portland Gas and Coke Co. and the Pacific Power and Light Co., a reflection of the public service name, but its most famous tenant was the first Nike retail store on its ground floor.

In June, a chiller located in the basement of the historic building was scheduled to be replaced. NessCampbell Crane + Rigging was hired for the chiller installation. This included removing the old chiller and lowering the new one through a 10-foot access panel in the sidewalk. The seemingly routine project raised a number of challenges for the crane rental company.

First, the new 10,500-lb. chiller was 20 feet long. “There was no other way to get the chiller in the building but through that hole, and the chiller was too long to lower through the hole in its correct standing position,” said Jeff Ross, estimator and project manager for NessCampbell. 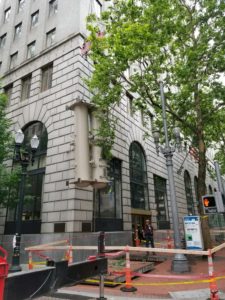 Second, time was limited to perform the work because the city of Portland would only allow the sidewalk to be closed for one shift—that included removing the old chiller and delivering the new one in the short window of time.

Ross said normal rigging methods using chain hoists would have taken days to complete the project, so NessCampbell’s engineering and CAD departments formulated a new plan to meet these requirements.

The old chiller in the basement of the Public Service Building was broken down into several dozen pieces, which were removed using a 100-ton Link-Belt HTC 86100 hydraulic truck crane. “We started at about 7 a.m., and it took us until about 2 p.m. to crane out the 50 demo’d pieces,” Ross said.

Engineered lifting points had been added to the new chiller to enable it to be lifted and rotated vertically. The truck crane, which was selected because it had sufficient line capacity for a two hoist-line lift, was equipped with a spreader beam and rigging blocks to transfer the load. 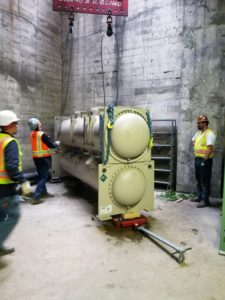 Chiller rotated horizontal in the basement.

“We got it standing vertically and lowered it through the 10-foot hole,” he said. “From the sidewalk level to the bottom of the basement is 35 feet. When the chiller got close to the floor in the basement, we then lowered down the two line on the crane and rotated it back into horizontal position.”

Developing a strategy for the chiller installation was key to the Public Service Building project’s success. “Everyone was impressed that it went so well, but that’s how we roll,” Ross said. “We do a lot of planning for the jobs that we do, so it was business as usual.”