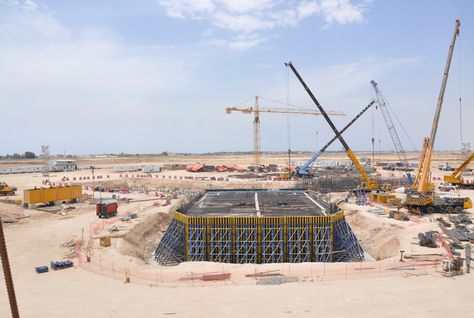 The developers behind Kingdom Tower, which aims to become the tallest building, said they have bought the worldâ€™s highest construction crane.

The crane would be able to reach the towerâ€™s ultimate height of 1km and lift up to 18 tonnes at a speed of 44 metres per minute,Â Saudi Gazette reported.

Known as a â€œclimbing craneâ€, the machine is designed to extend as construction of the tower progresses. Created by Germanyâ€™s Liebherr & WolffKran, the crane would be attached to the body of the building but sit atop a narrow support tower 2.4m by 2.45m wide.

The crane also features the latest in heavy-lifting technology that allows it to withstand harsh weather conditions, in particular the strong winds common at such heights.

â€œNow that we have completed our subterranean work, we are airborne,â€ Jeddah Economic Company CEO Mounib Hammoud was quoted as saying.

â€œThe unprecedented size and height of Kingdom Tower means we can only utilize the very best in equipment, material and methods. Liebherrâ€™s and WolffKran very impressive and innovative cranes fit this bill.â€

Above-ground construction started this month and the firm expects the first 10 floors to be completed by the end of the year.

KingdomÂ Tower aims to take over the Burj Khalifa (829.8m) as the tallest in the world, with 170 stories.

Â The company has announced a five-starÂ FourÂ Seasons HotelÂ would take up seven floors, with 200Â rooms and 121 serviced apartments, while another seven stories would be used for offices.

It also would have the worldâ€™s highest observation deck, at 644m.