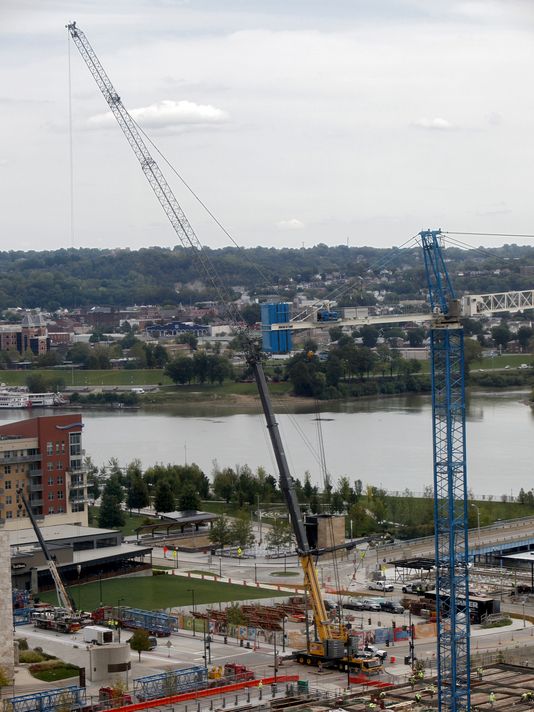 The tallest mobile crane in the United States just went up on Cincinnati’s riverfront.

It’s hard to miss now from its spot in The Banks development alongside the Underground Railroad Freedom Center, but don’t wait too long to check it out. It’ll be gone by Thursday.

The mobile “assist crane” stands 323 feet, or 32 stories high. That’s higher than the goal line-to-goal line length of Paul Brown Stadium’s field and taller than many of the downtown buildings nearby.

So who needs a crane that tall? Construction crews at The Banks will use it to assemble a smaller but more permanent crane on the site, and that crane will then help build an apartment complex and the new General Electric office building.

The “smaller” crane will stand 290 feet high. Another crane already in use at the site stands 233 feet.

The mobile assist crane is kind of a hired gun for engineers, moving from site to site around the country to build the “tower cranes” that stand for the duration of a high-rise construction project. Those overseeing The Banks project said the mobile crane here this week is the tallest in the country.

The big crane’s work is complicated but quick: It went up in about seven hours Monday and will be dismantled and rolled away by the end of the day Thursday.

“A lot went into this,” said Alan Williams, operations manager at The Banks. “It’s a big deal.”

Luffing jib put to the test as Tower Crane goes up on Cincy riverfront was last modified: September 18th, 2014 by Ron Selby