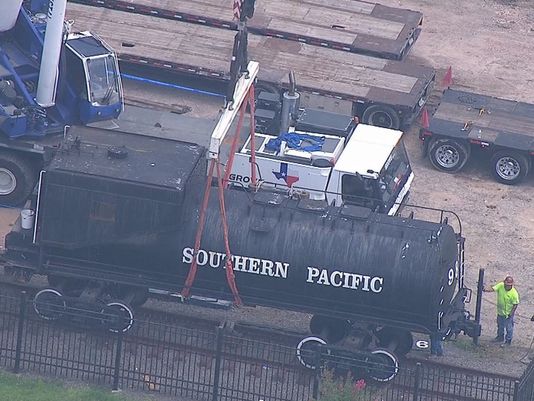 HOUSTON — A Houston fixture was on the move Wednesday.

Crews used a crane to lift the 300,000-pound Southern Pacific 982 steam engine from its home between the George R. Brown and Minute Maid Park.

It was lifted 15 feet into the air and to the opposite side of the lot, where it currently resides, so that the tracks it sits on can be leveled.

It’s all part of an extensive restoration project to move the steam engine into its permanent home inside the Nau Center for Texas Cultural Heritage.

The SP 982 was built in 1919 and the Southern Pacific Railroad gave the engine to the Houston Junior Chamber of Commerce and City of Houston in 1957. The engine was moved from Hermann Park to downtown in 2005.

The Houston Junior Chamber of Commerce gifted the engine to the Nau Center of Texas Cultural Heritage last year.