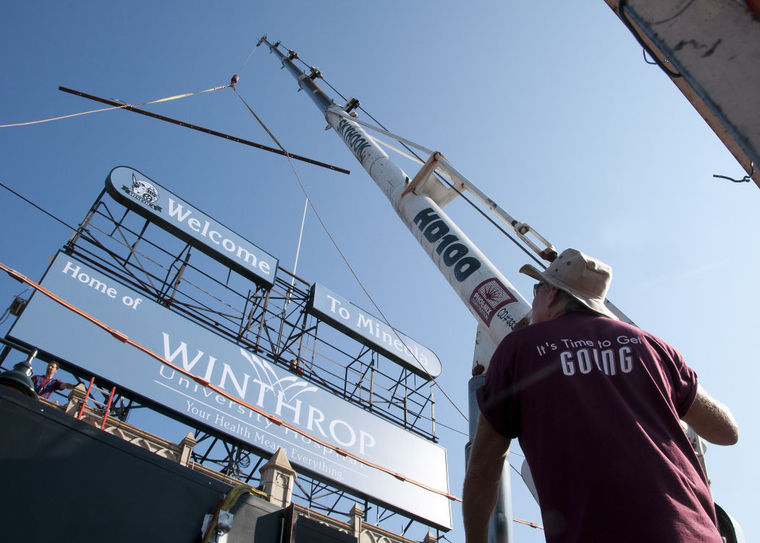 Workers from the Going Sign Company, which put up the original welcome sign in 1940, finished the work in four hours with the help of a pneumatic crane that hoisted the largest segment of the sign in place.

The sign is comprised of two banners 36 feet in length. The three-foot high top banner bears the Village of Mineola logo and the words â€œWelcome to Mineola.â€

A bottom banner eight feet high displays the Winthrop-University Hospital name on it over the words â€œYou Health Means Everything.â€ An image of the American flag sits between the two banners. A clock rests in the middle of the top banner, replacing a clock that hadnâ€™t worked in years.

Each segment of the sign is blue with white lettering, in contrast with the old sign which was cast in red.

A spokeswoman for Winthrop said the LED lighting that will illuminate the sign at night will be functional by the end of this week. She declined to comment on how much the sign cost.

Going Sign President Jim Going, who oversaw the erection of the new sign on Saturday, said he felt a twinge of nostalgia replacing the sign that his grandfather, John, had originally constructed.

â€œMy familyâ€™s been in Mineola 80 years. Thatâ€™s why I kept the old sign up so long,â€ Going said.