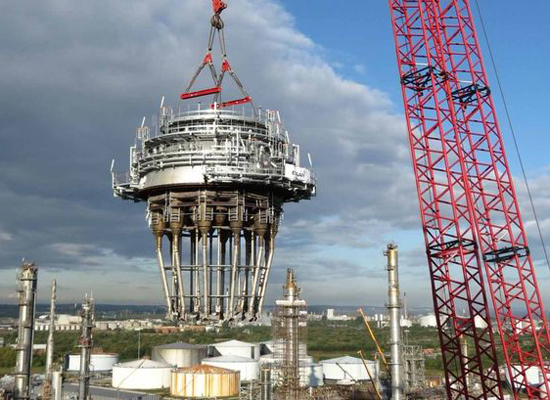 The installation of the â€˜regenerator headâ€™ for a key petrol-producing installation at the refinery is part of a refurbishment project.

The 428-tonne steel head was lifted 225ft before being guided into position on the refineryâ€™s flagship catalytic cracking unit, the largest of its kind in Europe. 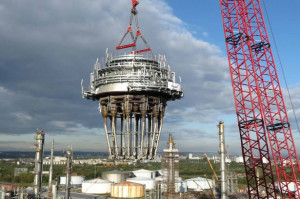 The operation was completed in just over five hours, using the 335ft tall crane with a massive 1,500 tonne counterweight for the lift.

The regenerator head, complete with refractory lining and cyclones, is the largest that has been fabricated and transported in the world.

Essar says it is a key feature of the residue catalytic cracking unit which is vital to Stanlowâ€™s petrol production.

The uplift will give the refinery unit another 25 years of life.

The company sees the move as part of its business plan to ensure it can be profitable on a sustainable basis and can continue to grow.

â€œThe lift was a complicated piece of engineering and I want to pay tribute to everyone involved that it was completed safely and ahead of schedule,â€ added Mr Schultz.

The Stanlow refinery is the second largest in the UK.

It can handle almost 300,000 barrels of oil a day and produces about 15% of the countryâ€™s transport fuels, including 3bn litres of petrol, 3.5bn litres of diesel and 2bn litres of jet fuel a year.

Pizza Ovens call in a Crane

Crane Tips over in India