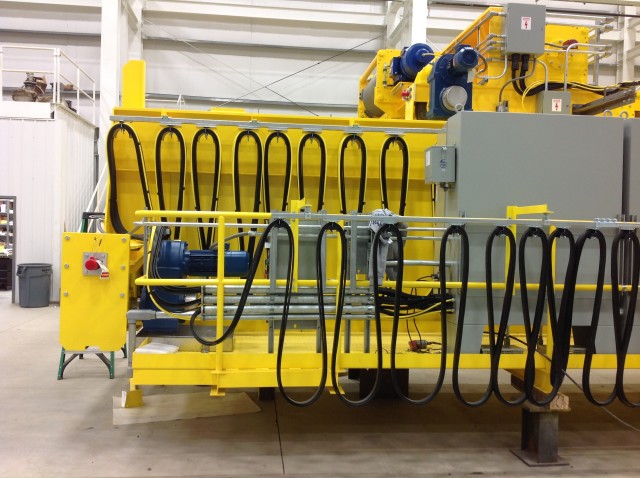 Turbine cranes are specifically designed to lift one the largest and most expensive pieces of equipment in a generating station. Since they’re confined to the turbine hall, these cranes are generally agnostic regarding the power plant’s source—the one exception being nuclear power, which has its own requirements.

Although overhead cranes are used in a variety of industrial applications, those designed to lift power turbines are a special breed. Power turbines are both extremely heavy and highly balanced, leading to what may seem like conflicting requirements in large load lifting: high capacity and high positioning accuracy.

“That’s why we provide variable speed control on these cranes, so we can get very slow speeds,” said Bruce Seiz, Sales Engineer for American Crane & Equipment Corporation.

Due to these particular requirements, turbine cranes tend to be custom-built. “We’ve been working to standardize some of the components, because most of them are about the same capacity, but I wouldn’t call these off-the-shelf cranes,” Seiz commented.

For this reason, it’s helpful to have an example.

American Crane recently provided a customer with a 90/20-ton top running double girder crane. “I think on that particular one, the bridge weight without the trolley is around 150,000 lbs.,” said Seiz. Despite their huge size, most turbine cranes run on standard 460V, three-phase power.

“To us, this is what we do all the time, but in the world of cranes these are very large pieces of equipment,” said Seiz. “The crane in the photo is a 106-ft span. At 90 tons, that’s a big girder.”

Turbine cranes are certainly not easy to move before they’re installed, but the actual transportation of the cranes is relatively straightforward. “Of course,” said Seiz, “we have to break the crane down to ship it, but usually just into a few pieces. We’ll normally ship it with just the two girders and the trolley, so there’s minimal assembly on site.”

Once the crane arrives on site, it’s typically hoisted into position by one or more mobile cranes before the roof of the building is installed. Although most of the turbine cranes manufactured by American Crane are installed in new buildings, the company also offers rebuilds for cranes as requested.

“We always have an installation plan in mind as we’re building the cranes, because we know the size of the crane poses some restrictions,” said Seiz. “For example, we’ll have pre-done rigging points and put lifting lugs on it.”

American Crane offers both turnkey services for installation, as well as site supervisors for customers who wish to install the equipment themselves.

Although the majority of these cranes are radio-controlled, some also incorporate an operator cab as well. “We have built a few with cabs, but in those cases, they also have a radio so they can switch back and forth,” said Seiz.

When it comes to actually controlling the cranes, the advantage of being able to operate them at slow speeds really shines through. It’s not uncommon to see operators jogging cranes in industrial applications, which increases the risk of shock loads.

“With the variable frequency drives, you really don’t have to do that jogging anymore,” explained Seiz. “In the old days you had a three- or five-step wound rotor on there, so you didn’t have the precise speed control you do now. Now, you could crack an egg with some of these cranes.”

Given their specificity, it’s not surprising that the maintenance for these cranes differs from those used in other industrial applications. This is due, in large part, to the relative infrequency of their use. “Customers may only pull the turbine rotor every couple of years, so the cranes aren’t used that heavily,” said Seiz.

The Crane Manufacturers Association of America (CMAA) has established six crane service classes, from Class A (standby or infrequent service) to Class F (continuous severe service). Cranes used in steel mills, for example, are typically rated Class E (severe service) or Class F. Turbine cranes, on the other hand, are rated Class A.

However, that doesn’t mean these cranes are simply sitting idle when there’s no turbine maintenance to be done. “Most of the cranes have an auxiliary hoist on them—a lower capacity hoist that customers can use for other maintenance applications,” explained Seiz. “If we’re talking about a 90-ton crane, it may have a 20- or 25-ton auxiliary hoist on it they can use for other purposes.”

Because of their relative infrequency of use, turbine cranes usually require more inspection than maintenance, but proper inspections are critical for the same reason. “It’s like a car,” said Seiz. “If you don’t run it for several years, it’s not going to turn over as well. But the inspection and maintenance are still minimal compared to a steel mill crane.”

Whether it’s for natural gas, biomass, geothermal, hydroelectric or waste-to-energy, turbine cranes are an essential part of any power plant. But what really sets these cranes apart from other industrial equipment?

“In a mill application, cranes are normally running at high speeds, whereas these run at slow speeds,” said Seiz. “The real difference between this and a steel mill crane is the precision of the speeds and being able to line the turbine up to a fraction of a fraction of a millimeter.”

This precision, plus their size, is what makes these cranes unique. “Capacity-wise, we currently have an order for one that’s 120 tons,” said Seiz. “We installed some about two years ago that were 160 tons. Span-wise, the one in the picture at 106 feet is the longest span.”

For more information, check out the American Crane guide to turbine powerhouse cranes.