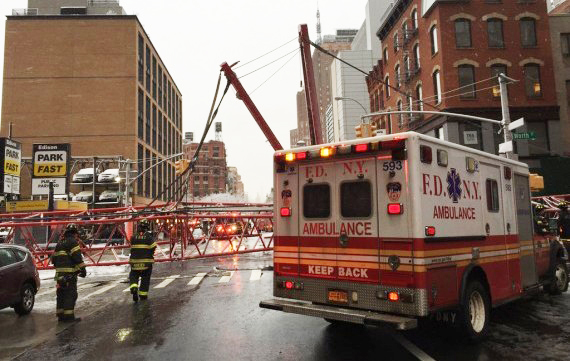 The collapsed crane on Worth Street in Tribeca

NEW YORK CITY – The deadly crane collapse that killed one man and injured two others on February 5, 2016 in Tribeca was caused by the rig operator’s negligence, according to state investigators.

The 15-story-crane crashed after the operator, Kevin Reilly, of Galasso Trucking and Rigging, began lowering the boom on a windy day in February and fell across two city blocks.

The New York State Department of Labor cited Galasso for two serious violations, one for not having any procedures in place in regard to wind, ice and snow, and another because the manufacturer procedures were not followed. The company is contesting the violations and $22,000 in fines.

After the collapse, the wife of financial analyst David Wichs sued the city for $600 million over his death.

Thomas Barth, a crane expert, told ABC that the operators “basically did nothing right when they started lowering that boom.” In the rush to get out of the wind, they ignored the safety manual, he said.

Two days before the deadly collapse, a city inspector was on site to inspect the crane but the crane was already in use when he arrived. Galasso was fined $800 for that alleged infraction.

The DOB says the investigation is ongoing and that they’ve instituted new rules prohibiting the use of cranes when winds exceed 20 miles per hour, and require all cranes to have wind-measuring devices.

Base Jumping Off Cranes?