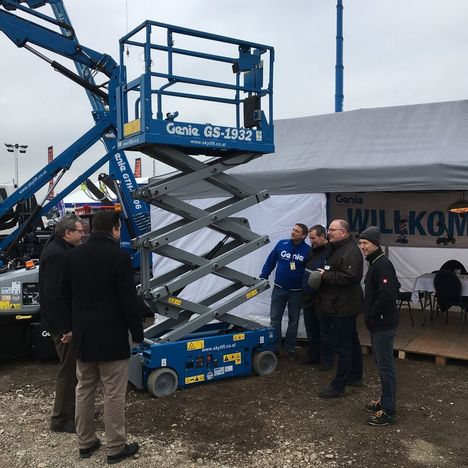 Genie has appointed Skylift as its aerial lift distributor for northern and eastern Austria.

Headquartered in Wolfsbach, between Vienna and Linz, Skylift is a sister company to HDM, which is already a dealer for Genie telehandlers in these territories. The extended co-operation between the two companies was launched at the Mawev exhibition where Skylift showed a 60ft Z-60/37 FE articulated boom lift and a 19ft GS-1932 electric scissor lift alongside a 2.5 tonne/six metre GTH-2506 compact telehandler.

Genie strategic accounts manager for Germany, Austria and Switzerland Markus Happ said: “Thanks to the good cooperation with HDM in recent years, we are confident that we have found Skylift to be a competent partner with specialist and industry knowledge. This new partnership will enable us to meet the increased demand for Genie aerial work platforms for this region effectively and in a customisable way.”

Telehandler on the roof