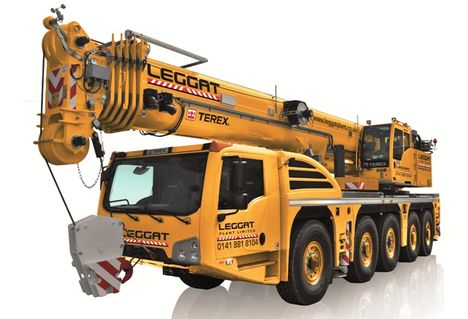 Glasgow-based rental company Leggat Plant has taken delivery of the first 130 tonne Terex Explorer 5500 All Terrain crane in the UK.

The five axle 5500 features a 60 metre main boom with a 11 to 21 metre bi-fold swingaway extension, which can offset up to 40 degrees. A 12 metre insert can also be used to extend that to 33 metres. The new crane will be used for a variety of applications ranging from housing and bridges to demolition and machinery installations.

Leggat Plant owner Eddy Donaghy, said: â€œOur last Terex crane, a Challenger 3160, delivered in September 2013, has proved so successful and enjoyed such a high utilisation rate, that we had no hesitation in choosing this latest model from Terex. A more than competent performer delivering a high degree of manoeuvrability, with duties unmatched by other machines, it promises to be an invaluable addition to the fleet in this fast growing sector of the market,â€

Founded over 140 years ago, Leggat Plant is the longest established crane hire company in Scotland. Part of an ongoing investment program, the new Explorer 5500 brings the number of Terex cranes in the companyâ€™s fleet to seven.