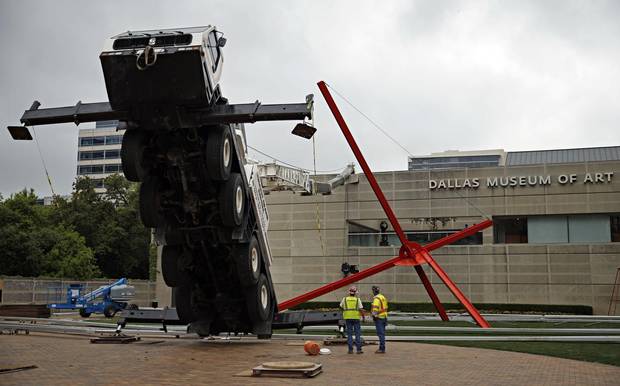 Workers look on at a collapsed crane in front of the Dallas Museum of Art on Friday, April 3, 2015 in Dallas. The crane damaged part of the front of the building, but no injuries were reported. Photo: G.J. McCarthy, Dallas Morning News

A crane truck tipped over on Friday, April 3, 2015 at the Dallas Museum of Art, narrowly missing one of its most iconic sculptures.

The accident happened about 9:30 a.m. at the museum, where the crane could be seen resting on the roof of the museum â€” mere feet from â€œAve,â€ sculptor Mark di Suveroâ€™s red steel piece on the south lawn.

The museum issued a statement confirming that no sculptures were damaged in the accident. The crane was being used to set up a tent for the museumâ€™s Art Ball on April 11.

A police officer at the scene said the crane operator was taken to Baylor University Medical Center, but early reports indicated his injuries were not serious. 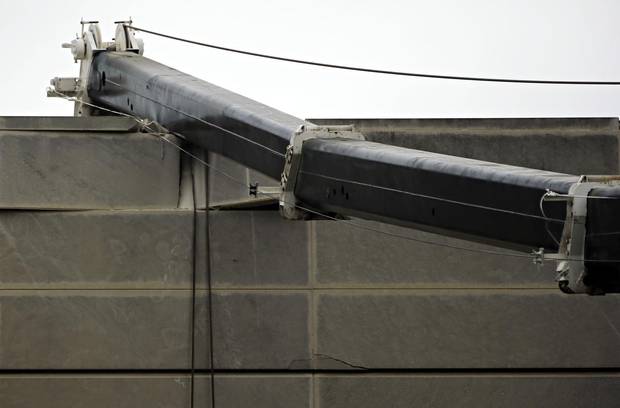 Part of the crane rests on top of the Dallas Museum of Art. Photo: G.J. McCarthy, Dallas Morning News

â€œThe operator was injured when the crane fell. He was ambulatory when the ambulance arrived on the scene,â€ the museum said. â€œOur primary concern is for the well-being of the crane operator, as well as the safety of our visitors, staff, and volunteers.â€

The museum said it plans to move the crane by this afternoon.

James Walker was sitting in his truck waiting for the museum to open when the crane truck fell. He said the crane operator seemed to be fine.

â€œThe man sitting inside bumped his head on the window,â€ he said. â€œI donâ€™t think he got hurt that bad.â€

Scharff Crane Rental declined to comment on the accident.

Workers could be seen removing another sculpture from the balcony underneath where the crane was resting.

Curious passers-by gathered at the corner of Harwood Street and Ross Avenue, marveling at the sight at the DMA.

â€œThe latest exhibit of the DMA,â€ one man joked, as he walked by.

Jennifer Caveness, a trainer at Trophy Fitness across the street, was working with a client when she saw the truck fly up as the crane smashed into the roof of the building.

From the second floor gym, Caveness saw a handful of workers scatter away from the crane, she said.

â€œI know itâ€™s Good Friday, but itâ€™s a very bad Friday for them,â€ she said. â€œBut as long as everyone is OK, itâ€™s all good. Buildings can be fixed.â€ 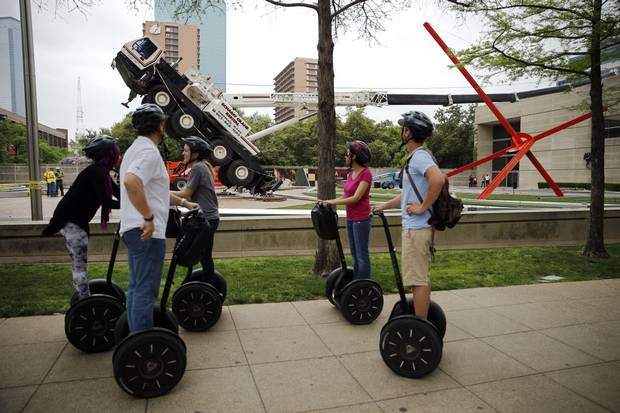 Riders on a Segway tour stop to view the collapsed crane in front of the Dallas Museum of Art. Photo: G.J. McCarthy, Dallas Morning News