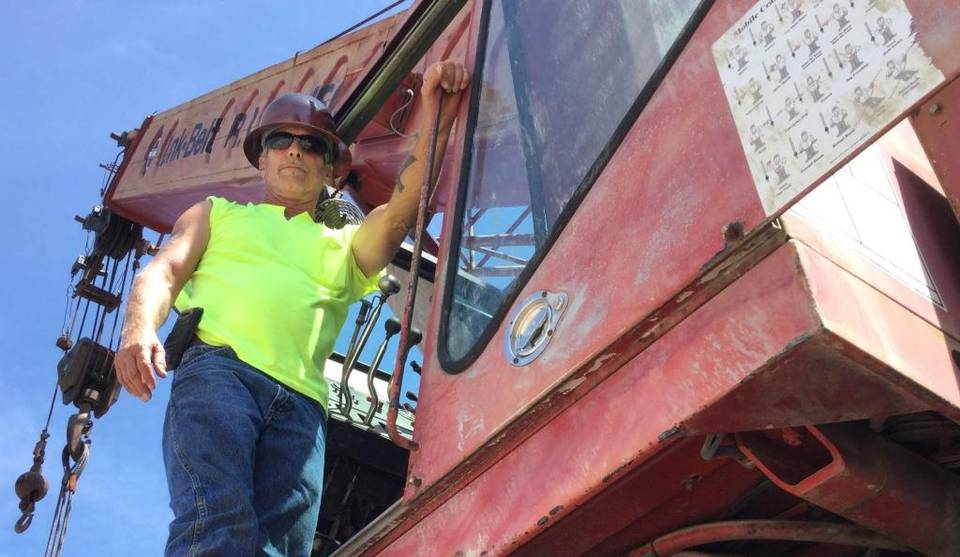 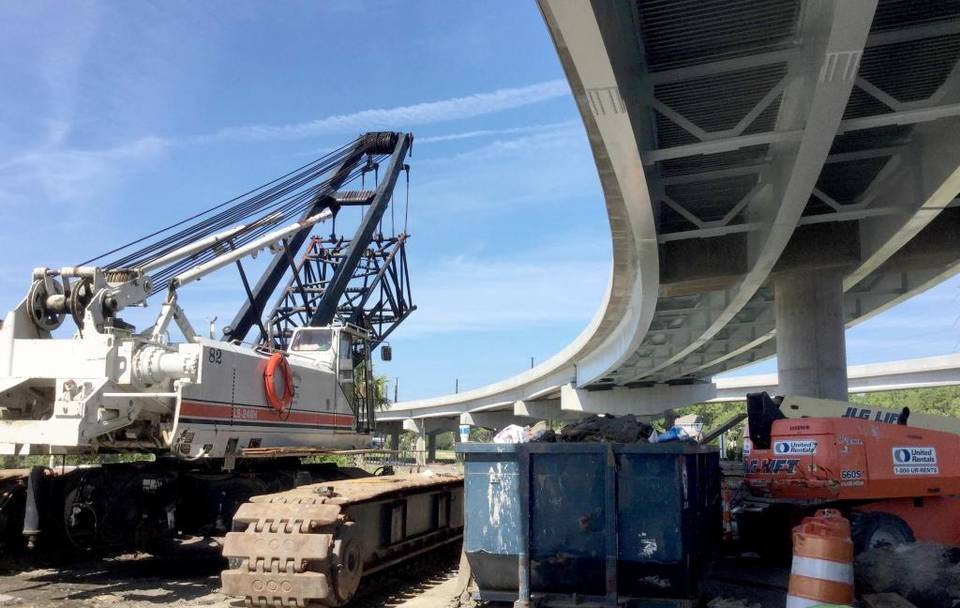 David Spears sat in the craneâ€™s cockpit and lowered the 46,000-pound counterweight onto the tractor trailer.

Jesus was with him.

After heâ€™d nestled the load onto the truck, Spears tugged at the left sleeve of his neon-yellow T-shirt â€” a tattoo of Christ peeked out at the workers securing the weight on the trailer.

The men worked efficiently, grease-stained and dirt-covered hands throwing heavy chain across the counterweight as the truck idled in the parking lot of the Kangaroo Express gas station off Fording Island Road.

His work done, Spears climbed down from the cockpit. A silver, braided ponytail snaked out the back of his hardhat, and when he turned around, sunglasses rested over a white handlebar mustache.

He rolled up his sleeves.

â€œAnything to get a little wind, man,â€ he said, referring to the cockpitâ€™s glass canopy, which was propped open atop the crane. â€œThat thingâ€™s like a magnifying glass.â€

Spears, 56, of Augusta, Ga., has been operating cranes for 37 years. For the past eight months, heâ€™s worked for R.R. Dawson Bridge Co. on the Bluffton Parkway Flyover in South Carolina. The $45-million project is scheduled to open Friday, Beaufort County Engineering Director Rob McFee said Wednesday afternoon. The first cars will be allowed onto the bridge during â€œa non-peak traffic time,â€ McFee said.

When those first cars on the flyover near the on-ramp that merges onto U.S. 278 toward Hilton Head Island, theyâ€™ll be driving over pilings Spears placed with a crane. Hammering a 55,000-pound piling into the ground is a dangerous job. It requires precision and care. Especially in Spearsâ€™ case â€” his son, Donnie, is down below, in the shadow of the 80-foot concrete beams that dangle from his machine. 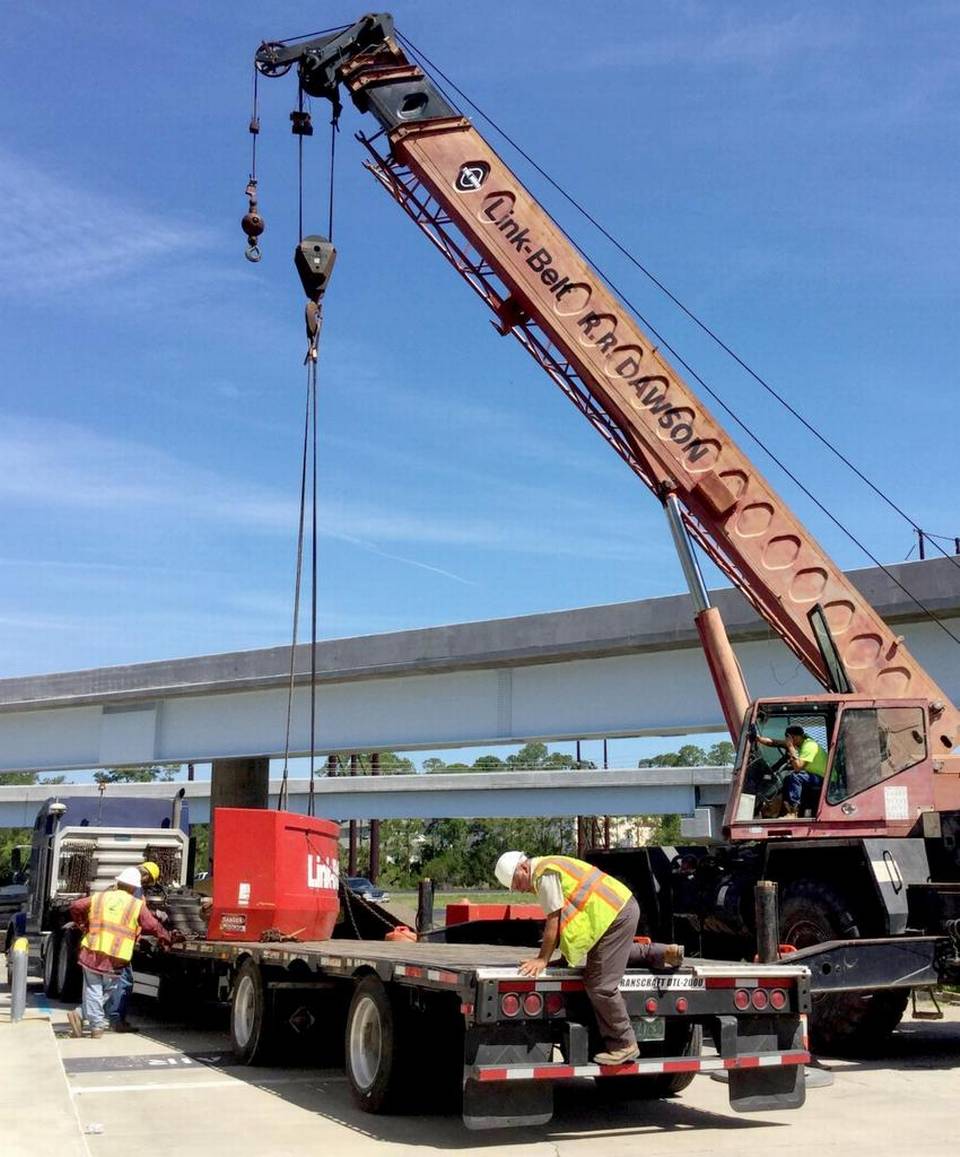 â€œItâ€™s scary as hell if youâ€™ve got a bad operator,â€ Donnie Spears said, referring to placing pilings. His father sat next to him, in the passenger seat, as the men waited to order in the Kentucky Fried Chicken drive-thru.

â€œA non-experienced person can get hurt or killed real quick,â€ he said.

The younger Spears, 23, also of Augusta, is named after his uncle, who was hit and killed by a train. Donnie Spears takes after his mother â€” he has dark hair and a darker complexion. But father and son joke they have the same jawline and chin.

The men have been working construction jobs together for the past four years. Son often guides father as he â€œfliesâ€ material over to work crews on the ground. During those maneuvers, they donâ€™t speak â€” they communicate with hand signals.

â€œI love it,â€ David Spears said. â€œI get to teach him something every day. Heâ€™ll be a crane operator soon.â€

Their chicken and mashed potatoes in hand, the pair drove back to the Kangaroo Express to lunch in the shade with their coworkers.

The men on the ground below are the ones who built the flyover, David Spears will remind you. He pointed to Federico Paramo, a concrete finisher who said heâ€™s worked on the project for the past three years.

â€œHe makes (the concrete caps atop the pilings) look smooth,â€ Spears said. â€œIt has to look good. Without his skill, the state wouldnâ€™t buy it.â€

Before men like Paramo can pour and smooth a cap, seven pilings have to be installed side by side.

Theyâ€™re placed one at a time.

Spears hammers them into the ground with the crane. Ultimately, only a few feet of each 75 to 80-foot piling sticks out of the earth.

But before he can hammer a piling, he has to â€œsetâ€ it.

To do that, he has to raise it above the ground and line it up inside the â€œtemplateâ€ â€” an elevated square target area made of steel beams.

Spears suspends the piling six to 10 feet above the ground inside the template.

â€œItâ€™s a scary feeling letting go of 55,000 pounds,â€ he said. If the piling were to fall crooked, it could bounce off the ground and damage the crane and crews below.

He drops it again.

Until more than a third of it is buried.

When heâ€™s back home in Augusta, he often wakes up in time for the 5 a.m. news on Channel 12.

â€œTheyâ€™ll play a little music,â€ he said, referring to the stationâ€™s teaser video ahead of the newscast.

â€œAnd theyâ€™ll show pictures of the bridge,â€ he said, referring to a bridge on the Bobby Jones Expressway that spans the highway.

â€œThatâ€™s something I can say till the day I die.â€