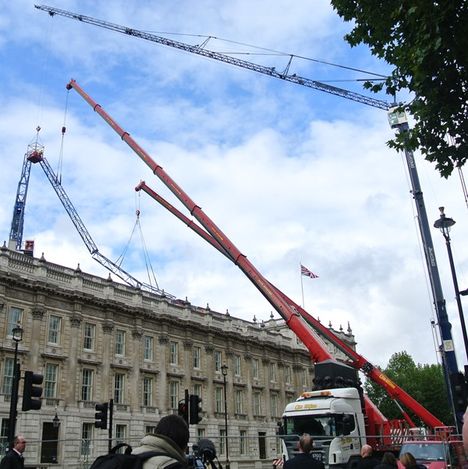 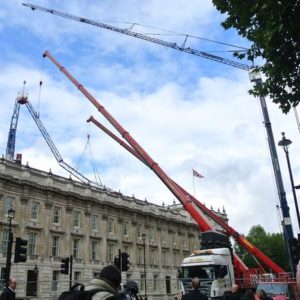 The tower crane that dropped its jib on the cabinet office in London has now been removed.

The two parts of the crumpled jib were lifted in a synchronized lift by two of City Liftingâ€™s larger All Terrain cranes, while one of the companyâ€™s Spierings mobile tower cranes handled a man basket to provide access for the riggers.

The damaged jib is being sent to the HSE Health & Safety Laboratory in Buxton for analysis. The Jost tower crane, which had been scheduled for removal on Sunday, had been set at an out of service radius of 12 metres and left to weathervane after its removal had been called off due to the high winds.

However a combination of swirling gusts and possibly a sluggishness in the craneâ€™s free slew capability set up forces in the jib which were too great for the jib bolts.

Another Jost crane of the same type lost its jib at the same time on a site on the Old Kent Road in London. Given the number of failures there has been it is possible that there is an inherent weakness in the Jost jib design that makes it vulnerable in high wind areas.