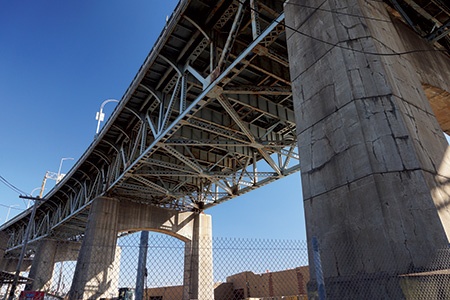 The Kosciuszko Bridge is actually two bridges in New York City that span Newtown Creek between Brooklyn and Queens. Opened in 1939, the 6,000-foot truss bridge is part of Interstate 278. It is not only known locally as the Brooklyn-Queens Expressway, but also for its bottleneck traffic. To reduce congestion and traffic delays, and increase traffic capacity, the New York State Department of Transportation is spending $554 million to replace the aging truss bridge with a majestic cable-stayed bridge. The new bridge began accommodating two-way traffic in early 2017, and demolition of the old spans will begin in summer 2017.

Bigge Crane and Rigging was selected to supply the equipment to remove the largest span, which is 125 feet high, and 300 feet in length. To safely meet the aggressive demolition schedule, a joint venture of Kiewit/Skanska will use Enerpac Heavy Strand Lift (HSL) 50006 strand jacks to lower the span.

Enerpac HSL 50006 strand jacks have 500-metric-ton capacity, and they operate in sets of four. To ensure the demolition schedule is met, a set of eight strand jacks will be used. The rest of the spans will be imploded in July 2017.

Truss demolition will require building strong lifting points on the existing structure. The largest span will be supported via strand jacks before being cut, lowered to the ground, and dismantled.

Enerpac delivered the strand jacks in March, 2017 and provided training and support for two Kiewit/Skanska operators in April. The Enerpac/Bigge team will also provide on-site support during equipment set up at the Kosciuszko Bridge, and when the span is lowered in June, 2017.

After analyzing the existing structure to determine its strong spots, Kiewit/Skanska will execute the large pick using the Enerpac strand jacks. Taking the large span down and dismantling it on the ground will be much faster and safer than performing these tasks at elevation.

“Most of the Kosciuszko Bridge is over land, and due to the number of offices underneath the bridge, there’s not a lot of room to maneuver,” said Mike Beres, Americas sales leader for Enerpac Heavy Equipment Technology. “We’re confident with the equipment chosen, and Kiewit/Skanska has the equipment and heavy lifting experience necessary to safely and efficiently remove the span and keep the project on schedule.”

Crane Sales and Service Signs on as Manitex-PM Knuckleboom Dealer

Bigge helps out in big way on...