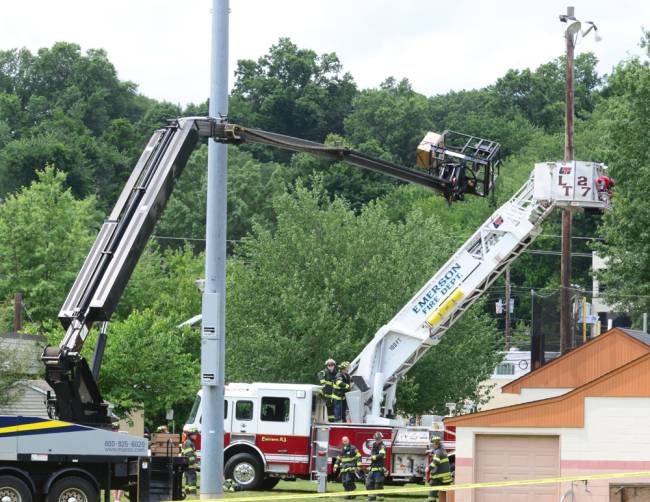 EMERSON â€” Firefighters rescued a 32-year-old Iowa man Tuesday afternoon after the aerial manlift crane he was working in broke and fell about 40 feet, leaving him stuck in its bucket.

Josh Lovell, a service technician for Musco Lighting, was working on field lights at Hillman Park in the crane’s bucket when it started to move.

“The next thing I know, I lose everything. No controls,” said Lovell, who comes from Melcher, Iowa. “I just hung on for dear life. It started off slow and then it got real quick.”

Firefighters rescued an Iowa man after the crane he was working in broke and fell about 40 feet.

Emerson police Chief Donald Rossi said the crane’s hydraulic line snapped, causing the bucket to drop about 40 feet, leaving the crane bent at a 90 degree angle. Lovell was suspended in the bucket over the field’s bathrooms and concession stand.

“It seems to be, for the most part, a happy ending,” Rossi said. “This guy’s pretty lucky. Thank God, he was in his harness the right way.”