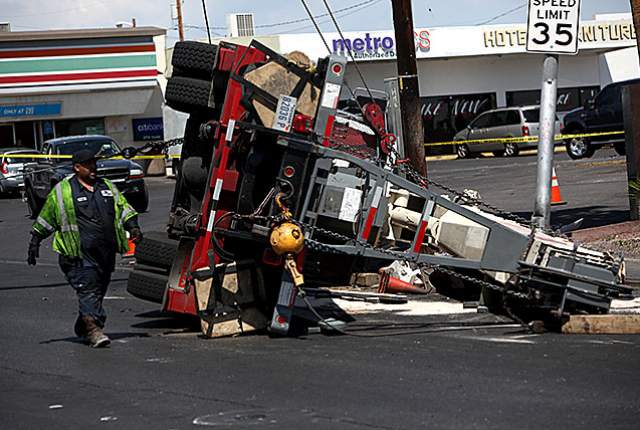 Police responded about 8:30 a.m. to Las Vegas and Lake Mead boulevards where a craneâ€™s upright boom struck a traffic light pole in the westbound lanes of Lake Mead. The crane then tipped onto its side and hit a light pole and a utility pole, said police spokeswoman Chrissie Coon.

Police closed the road because the three poles could fall into traffic, Coon said. Westbound Lake Mead was still closed just after noon, and north- and southbound Las Vegas Boulevard was restricted.

A crane truck’s crane hit a traffic signal on the corner of Las Vegas and Lake Mead Boulevards on Tuesday.

A pedestrian waiting at a bus stop sustained minor injuries after being hit by debris from the crash. The driver of the SUV and the driver of the crane were not injured.

Police advised drivers to avoid the area for the next several hours.