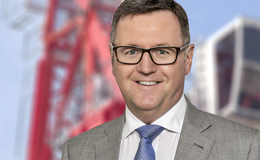 On August 1, 2019, Dr. Peter Schiefer handed over his position as CEO to Duncan Salt, the former Head of Sales and Service. Schiefer will remain Delegate of the Board of Directors and increase his focus on the strategic development of WOLFFKRAN.

Since acquiring WOLFFKRAN in 2005 Schiefer has held both positions as CEO and Delegate of the Board of Directors simultaneously. “We have grown immensely since then and have reached a point where it is no longer feasible nor in the interest of the company for one person to head the executive management, while at the same time fulfilling the duties of the Delegate of the Board. In order to position ourselves best for the future and successfully continue growing our business, we need to enhance our organizational set-up now,” Schiefer explains his decision. He will remain Delegate of the Board and invest the time gained driving and executing future-oriented projects such as the entry into new markets, the implementation of new technologies and the acquisition of WOLFFKRAN complementary products and services. “I am convinced that a split of the functions is a necessary step on WOLFFKRAN’s road to success and I am confident that we have found the perfect candidate in Duncan Salt to fill the position as CEO,” Schiefer concludes.

A perfect match
The appointment of Duncan Salt sees a lifting professional assuming executive responsibility at WOLFFKRAN, who not only has a proven track record in the industry, but also a profound understanding of WOLFFKRAN and its products, both from an internal as well as an external perspective.

Salt holds a degree in Mechanical Engineering and started his career in the construction industry with Laing O’Rourke. In 2005, Salt moved on to the tower crane business, first as General Manager of the Lifting Solutions division of Select Plant Hire Company Ltd, and then as Director and General Manager of HTC Plant Ltd, UK’s largest supplier of tower cranes operating a fleet of some 250 WOLFF tower cranes.

Following the acquisition of HTC, Salt joined WOLFFKRAN in August 2015. Initially heading the international sales team, he was promoted in January 2017 to take overall responsibility for Sales & Service alongside a position on the Executive Management Board. “Duncan brings an extensive network and a wealth of experience to his new position and shares the WOLFFKRAN DNA with us,” Schiefer explains.

“My goal is to drive the symbiosis between lifting services and crane technology. We are uniquely placed at WOLFFKRAN and through a greater emphasis on our common goals we will position WOLFFKRAN at the forefront of our industry setting benchmarks in service, quality and innovation,” Salt sets his own demands and adds “I am thankful for the trust and confidence placed in me by Peter and my colleagues and I look forward to taking on the opportunities and challenges that come with the position.”

Milestones of growth
Since the acquisition of WOLFFKRAN from MAN by Dr. Peter Schiefer in 2005, the crane manufacturer has been steadily expanding and has become an internationally established player in the tower cranes business. Important milestones on WOLFFKRAN’s path have been: the revival of existing markets in Central Europe as well as the acquisition of HTC in the UK and the market entry into France, the build-up of a strong presence in the GCC countries with a major rental, sales and service hub in Dubai, the entry into the US market with subsidiaries on the east and west coast serving customers across the country.

While steadily increasing its portfolio to include more than 20 different top-slewing tower crane models, the crane manufacturer has also become one of the key players in the rental crane business with one of the world’s largest rental fleets comprising some 700 tower cranes.

In order to meet the increasing demand for WOLFF cranes, a second manufacturing site was commissioned in Brandenburg, Germany in 2008, which started manufacturing in 2009 alongside the original site in Heilbronn. Preparations for the opening of a third manufacturing site in Domodedovo, Russia are currently in full swing.