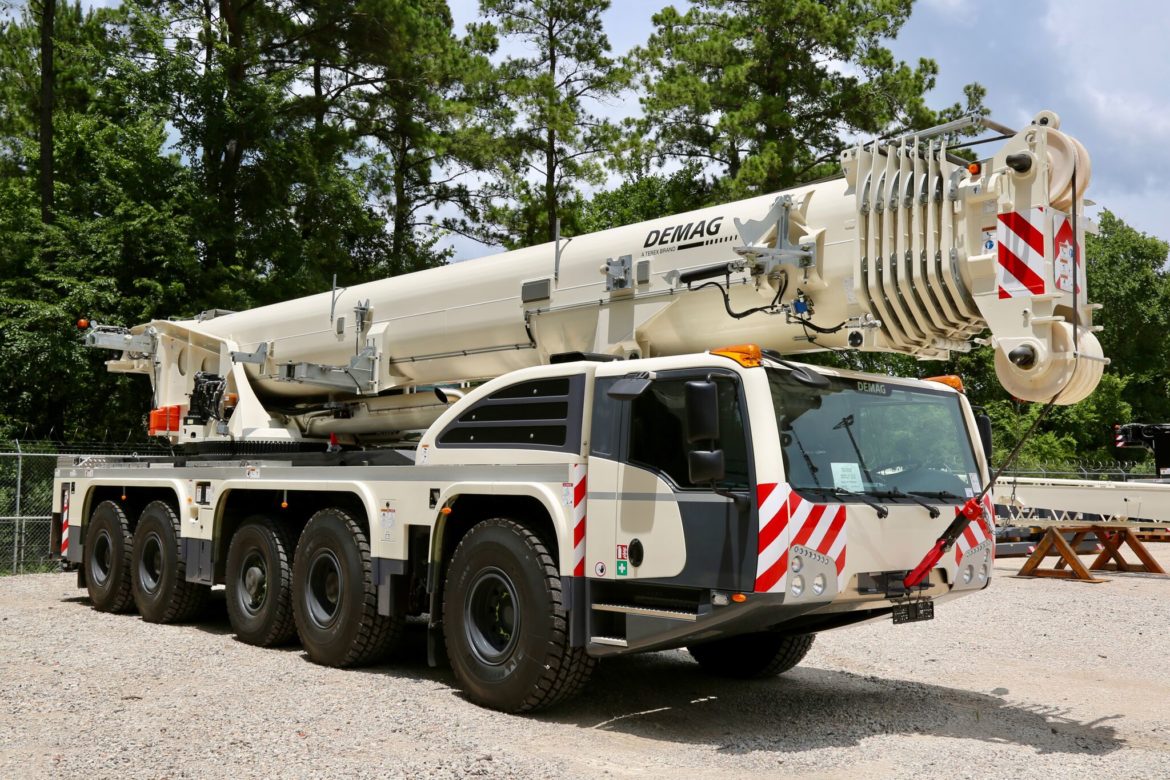 The Demag AC 220-5 all-terrain crane has been one of the most talked about models released from Terex Cranes in the last year. When the 245-ton unit was introduced at Bauma 2016, the 255.9-foot main boom was considered to be one of the longest main booms of any five-axle crane on the market. Its reach can be extended to a full 324.8 feet with boom extensions. The Demag AC 220-5 was designed to share common attachments and options, such as the jib and second hoist, among the five-axle cranes in the family.

Other features include all-axle steering, independent rear-axle steering, and a dynamic launch control that helps the operator position the crane in confined spaces. As one of the most compact cranes in its class, the AC 220-5 has a 10-foot-wide, 48-foot-long frame, ideal for navigating through confined areas. 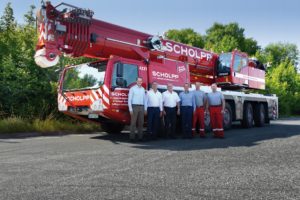 One of the reasons the crane was selected was because of its long boom. “It’s crucial for the crane to be able to lift high and wide while minimizing the required setup work,” Schuh said. “In fact, this is especially important for the indoor projects involved in our work with BASF. That’s why we ordered the crane with a hydraulic fly jib in order to extend the main boom.”

Another reason for Schlopp’s the purchase was for its IC-1 Plus control system, as its real-time calculations make the crane flexible. “The indoor spaces at BASF’s facilities are usually very constrained, which means we often need to work with asymmetrical outrigger setting,” Ochs said. “The IC-1 Plus is enormously helpful in these cases.” He is particularly impressed by the automatic counterweight setup function: Once the superstructure is positioned in a defined slewing range, the counterweight placed on the carrier is automatically rigged.

The crane also continues to gain traction in North America as new units make their way across the pond. In Mexico City, Mexico, crane and logistics company GSL took delivery of the first AC 220-5 in the Americas in February. “We determined that the Demag AC 220-5 all-terrain crane was the best machine for our needs after evaluating several crane models in, and around, the 220-tonne capacity class at Bauma last year,” said Carlos Salas, president of GSL. “The combination of this unit’s compact body design, maneuverability, reach, and high-capacity range was what really sold us. It will help us better service our customers in, and around, Mexico City — especially on those jobs where we don’t have a lot of room to work within.”

In June, CraneWorks Inc. received one of the first U.S. deliveries of the Demag AC 220-5 five-axle all-terrain cranes at its Houston headquarters. The Terex dealer made it available for purchase, and it confirmed this week that the unit has been sold (Crane Network will report the buyer when that information is available). 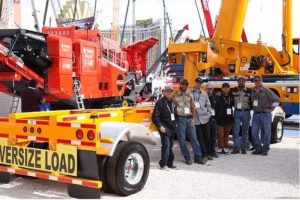 The Terex booth at ConExpo also featured a Demag AC 220-5 with a boom dolly built by TransWorld Manufacturing that allows the unit to be roadable in California. The challenge was for the dolly have a stretched, articulating frame but still weigh under 8,000 pounds. “Our standard tube-frame boom dolly of this size weighs around 9,500-10,000 pounds, depending on the tower design,” said Crystal Dieleman, president of TransWorld Manufacturing. “To meet the challenge, we used a custom-designed, high-strength steel frame.” The crane, which was later sold to Bigge Crane & Rigging, and dolly can travel legally with the auxiliary hoist, jib, and hook block.

Looking for a new Demag AC 220-5 to add to your fleet? Check out the current cranes for sale listed on CraneNetwork.com.

Alaska Crane Helps to Bring Back Life to Eklutna River