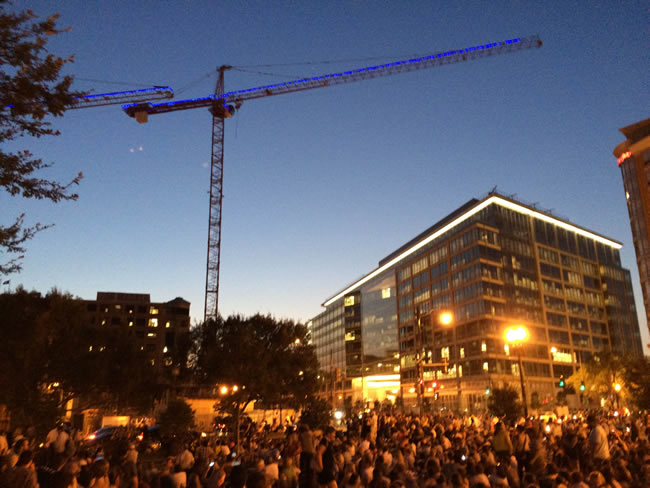 Last night, the Capital Fringe Festival took its exhibitions to new heights â€“ some 300-odd feet up. Last night, thousands of other spectators and I at Milian Park in Northeast witnessed the spectacle that was Dance of The Cranes. 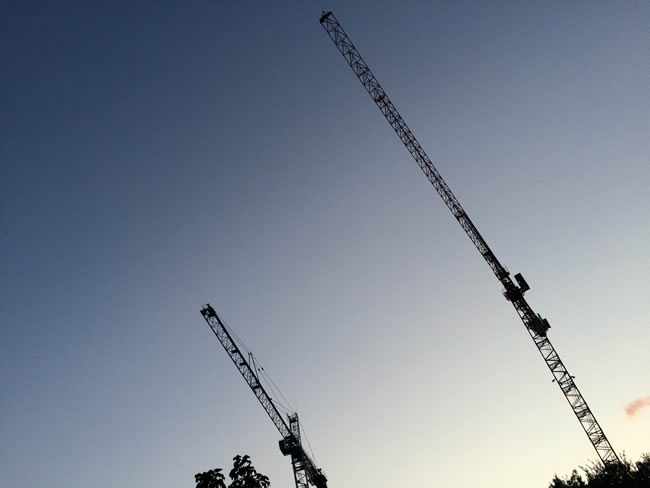 Dance of the Cranes at Capital Fringe on Wednesday, July 15

At sundown, two construction cranes dressed to the nines in ethereal blue lights began to swing in harmony for an hour-long performance set to ambient post-rock.

The event, previously staged in Toronto in 2009, drew some 4600+ attendees on its Facebook event. Itâ€™s hard to say how many of those were actually in attendance, but I can say that, by sundown last night, Milian Park and the surrounding blocks were packed so densely it was hard to move. Folks gathered on neighboring rooftops, and Fringe volunteers struggled to maintain clear paths along the sidewalks nearby. 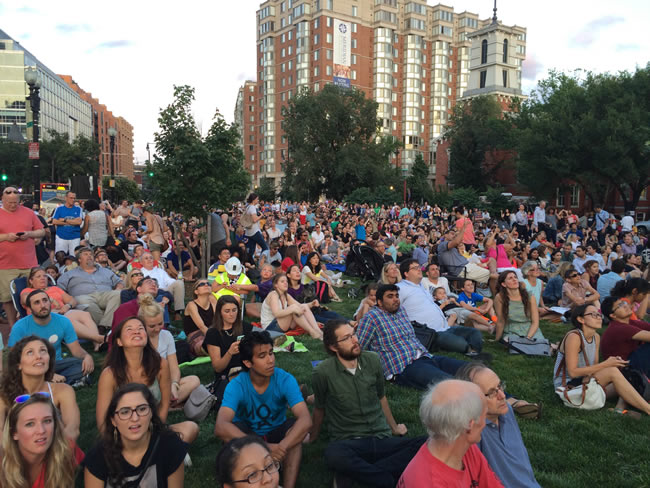 Audience gathered at Milian Park for Dance of the Cranes, part of Capital Fringe

The audience, of course, was decidedly Fringe-y. Artists participating in the festival turned out in spades to hustle their postcards and contribute to the vibe. Then again, the crowd wasnâ€™t entirely composed of Fringe regulars. Before things began one woman I spoke to told me that, though she had lived in DC for six years, this was her very first Fringe experience. Smoking an American Spirit green (and Iâ€™m not talking about menthols, if you catch my meaning) she told me what had brought her there: â€œwhy not? When am I ever going to see something like this again?â€

As the sun dipped downward, I heard this sentiment echoed in countless different voices. While no one seemed certain about exactly what it was they were about to witness, everyone I spoke to seemed to feel that whatever it was, they were unlikely to ever see it again. (That being said, Vickerd reported recently to the City Paper that he would soon stage crane dances in Brooklyn, NY and in Edmonton, AB.)

Cranes take a bow in Dance of the Cranes, part of Capital Fringe

The Dance of the Cranes was certainly something to see. The first great swings from crane #1 timed to swells in the music elicited cheers from the massive crowd. When crane #2 began to move, cheers turned to gasps as the cranes seemed to come dangerously close to colliding. By the time darkness fell, blue lights along the rotating cranesâ€™ necks mirrored the movement of celestial bodies visible in the backdrop of the night sky. Though things may have gotten a bit repetitive over the course of a full hour, the crane dance was really only a part (albeit a big part) of a much broader gathering of dedicated Fringians and passers-by alike. One spectator described it to me as, â€œbreathtaking.â€ One young boy told me with authority that it was â€œpretty cool.â€

But, for all that, what was it? Even after having witnessed it, Iâ€™m not certain I can say for sure. Now that itâ€™s all over, though, I am struck by something Fringe CEO Julianne Brienza had said to me when I cornered her last week at the Logan Fringe bar. Knowing I would be writing this article, I asked her (rather clumsily): â€œwhy do Dance of the Cranes, anyway?â€ To which she responded (and this is from memory, so Julianne â€“ please feel free to correct me): â€œI mean, the reason I wanted to doDance of the Cranes is kind of the same reason I wanted to do Fringe. Itâ€™s about making sure that art has a place in peopleâ€™s lives. With Dance of the Cranes, itâ€™s about making that place somewhere that people canâ€™t ignore.â€

If thatâ€™s the case, I canâ€™t wait to see what places Fringe will show up next.

Dance of the Cranes at Capital Fringe was last modified: July 16th, 2015 by Ron Selby