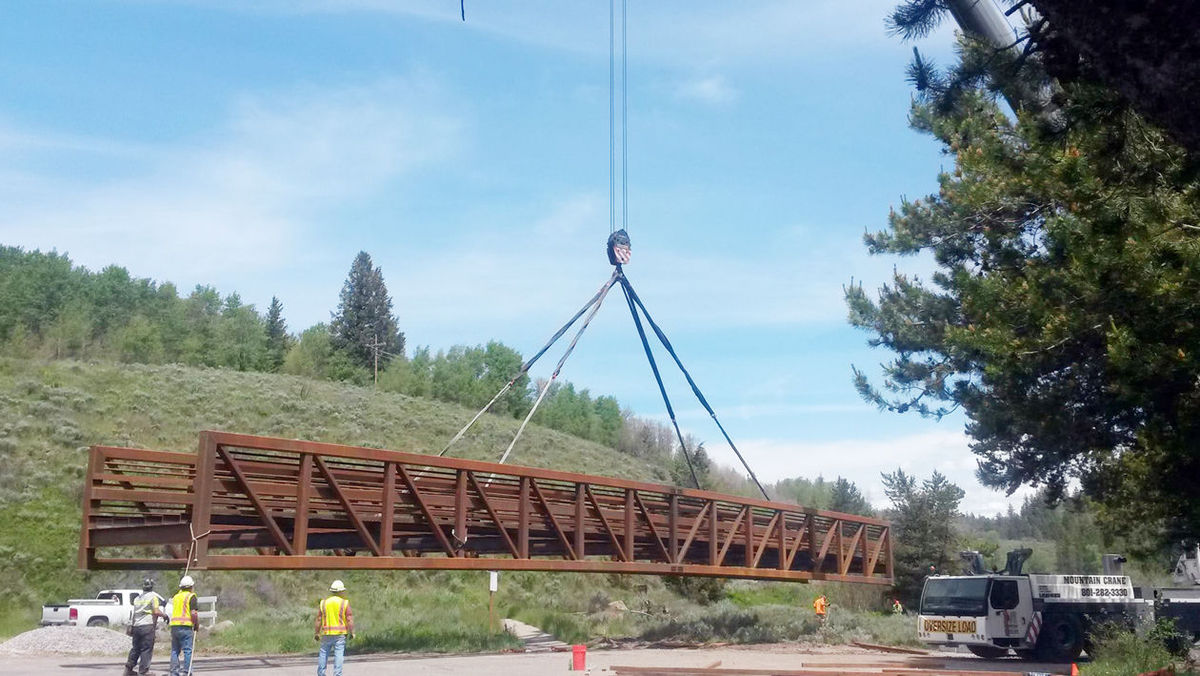 ASHTON â€” Members of the Caribou-Targhee National Forest and Fremont County held a special dedication ceremony on Monday to celebrate the completion of construction on the new Warm River Bridge.

About four years ago, Bill Davis, who at the time was the recreation program manager for the Caribou-Targhee National Forest, observed that the original bridge was in bad shape. Davis was concerned that it would not be able to handle the weight of snow and snowmobiles driving across it that coming winter.

He got in touch with Tamra Cikaitoga of the Fremont County Parks and Recreation Department, and they decided to apply for a grant to help them get started with the project.

According to an inspection report from 1950, the original bridge was installed around 1930.Â It was reconstructed, at least in part, or perhaps substantially, in May of 1964.

The decaying deck and rails were again replaced in April of 1986 and for a final time in April or May of 2008.Â The current bridge was installed throughout May and June 2015.

Davis said the end result, a free-span steel bridge with no piers in the water and rusted rails meant to aesthetically fit in with the natural setting, is exactly what they wanted.

â€œWe got very creative about funding, we got creative about the kind of bridge we would put here to better fit the setting of the campground. This project, in my mind, is a classic example of what can happen when a lot of partners get together,â€ Davis said.

Caribou-Targhee Forest Service hydrologist Brad Higginson said the absence of piers in the new bridgeâ€™s design is a very positive aspect for wildlife and floaters.

â€œThe piers obstruct fish passage, and other critters that live in the water as well,â€ Higginson said.

Ashton and Island Park district ranger Liz Davy said they got a lot of help from multiple engineers, but forest service engineer Tyrone Stone was the primary director of ensuring all of the technicalities were figured out.

The bridge was fully constructed off-site by Excel Bridge and then brought in and set by crane. 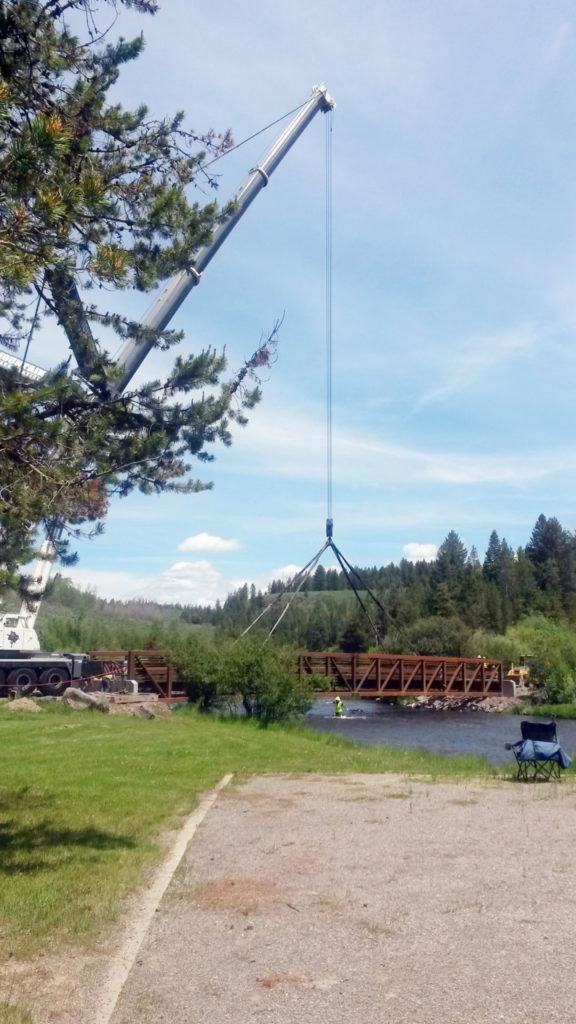 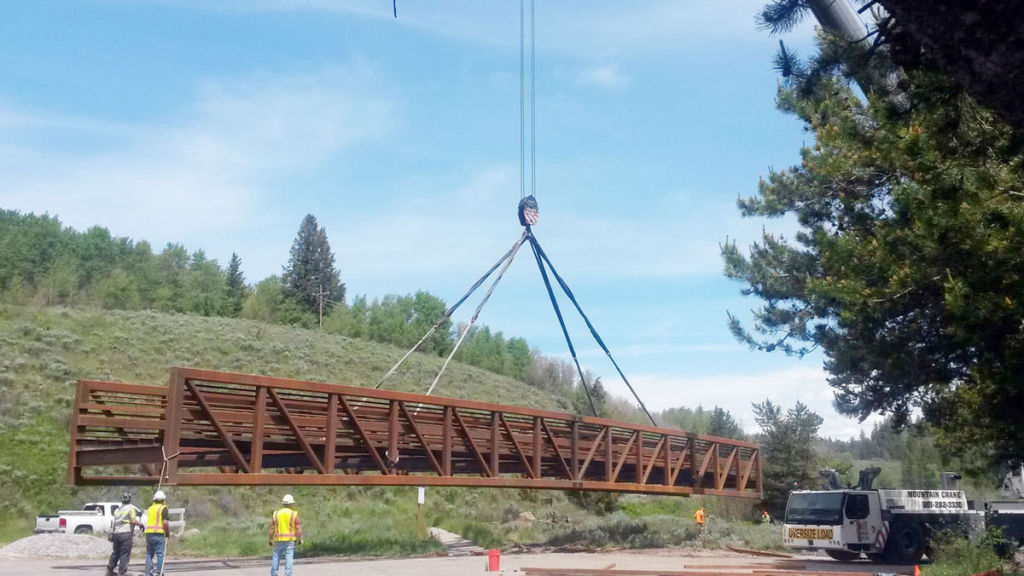 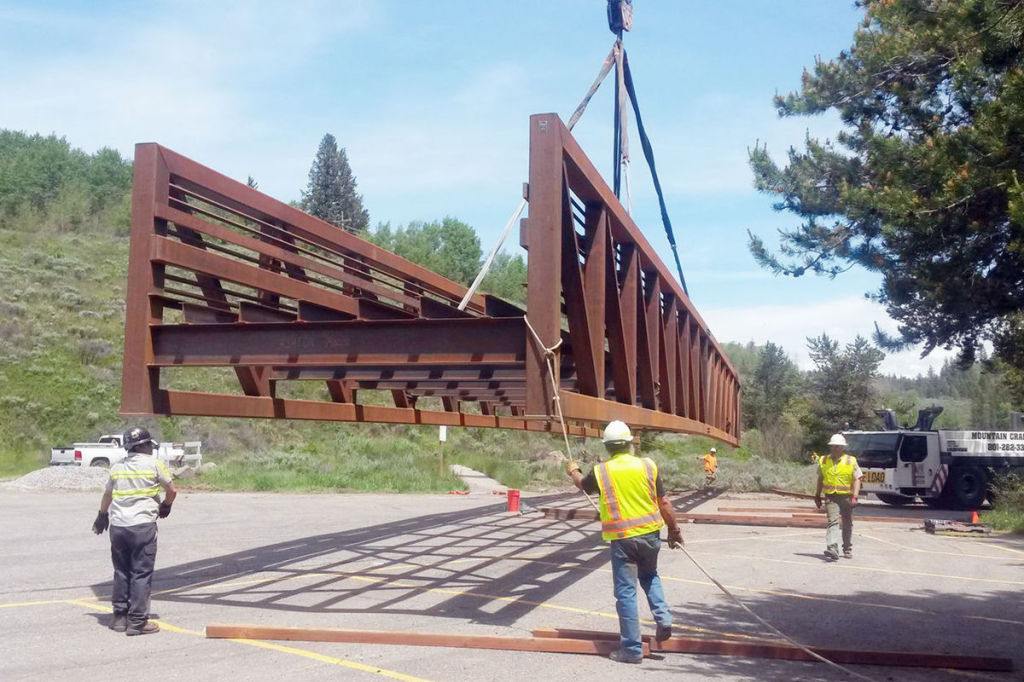 Fremont County Public Works Director Brandon Harris said he was â€œreally impressedâ€ with everyone who worked with making sure the crane work didnâ€™t go over the hours in the bid, and the work was completed on time.

Davy thanked the Fremont County Commissioners for all of their support getting the grants that were needed and generously contributing financially to the project as well.

Caribou-Targhee Forest Supervisor Garth Smelser said he was happy to have been invited to the celebration of the bridge dedication, and he reiterated his appreciation to everyone who contributed to getting the project completed.

â€œThis is not common in our agency to be able to pull this off, and we donâ€™t, unless we have partners,â€ Smelser said. â€œBut the price tag is pretty small when you consider the thousands, probably tens and hundreds of thousands [of people] in the coming years that will be able to connect with our public lands because of this bridge.â€