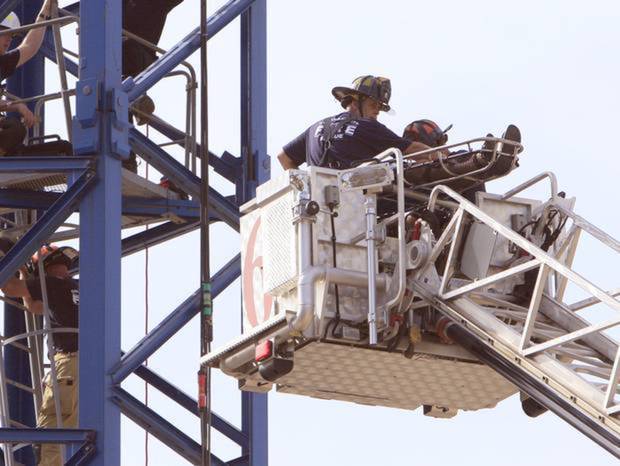 The worker was suspended in the crane’s basket about 50 feet above the ground at 800 Stanton L Young Blvd. in Oklahoma City. He was unable to operate the controls, and firefighters had to climb to the platform, which was 24″ wide by 55″ long, fire District Chief Benny Fulkerson said.

Oklahoma City Fire Dept. crews perform CPR on a crane operator as he is removed by ladder truck from the crane at 800 Stanton L. Young Blvd. in Oklahoma City, OK, Monday, July 20, 2015, Photo by Paul Hellstern. The Oklahoman

Oklahoma City firefighters worked desperately to rescue a man suffering from a heart attack while trapped in a crane on Monday morning.Â The man, who’s name was not released, could not be saved.

The safety director for Manhattan Construction, Matt Martinez reported thatÂ the subcontractor for the company working on the construction of a 10-story office building had died on Monday.

The worker was suspended in the crane’s basket about 50 feet from the ground at 800 Stanton L Young Blvd. He was unable to operate the controls of the crane, andÂ Â firefighters to climb to the 24 inch wide by 55 inch long platform, fire District Chief Benny Fulkerson said.

“He was able to talk to us for a little bit and said he had chest pains. We tried to get him in a harness to get him and lower him back down the ladder he’d come up, and about that time, he went into full arrest,” Fulkerson described.

While on the platform, rescuersÂ sent a heart monitor up and initiated CPR on the spot. The man was eventually secured into a metal basket and brought to the ground by the fire engine ladder, Fulkerson said.

“We were still trying to do CPR the best we could as he was on his way down,” he remembered.

Within about 75 minutes of the initial call, the craneÂ operatorÂ was loaded into an ambulance and taken to a hospital.

An autopsy has yet to be completed, but the man did have a history of heart problems, Â Martinez said.

“All indications are that it was a natural cause and was not necessarily work-related,” Martinez said. “We have crisis management plans. We executed them to the best of our ability and we were able to get emergency responders in there quickly.”