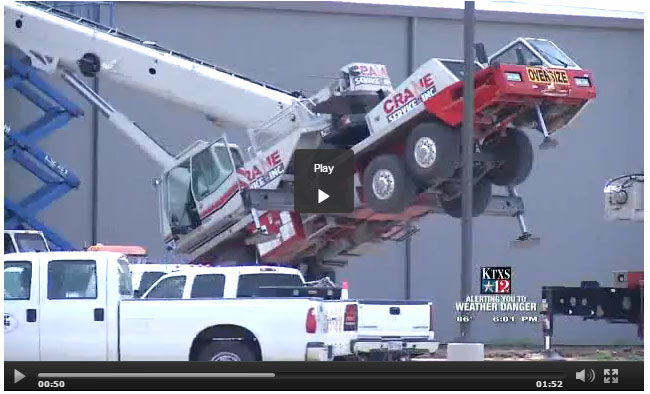 ABILENE, Texas -Â A construction crane toppled on top of a roof Monday at the new building addition at PrimeTime Family Entertainment off of Loop 322.

According to Primetime officials, a crew was trying to lift an air conditioning unit onto a roof when the crane could no longer bear the weight and tilted forward, dropping the unit.

The crane damaged the building, leaving a large dent in the structure. The unit landed on top of where it was supposed to go.

Larry Elliott, who works for K Simon Construction across the highway, said he saw the accident happen.

â€œWe heard a loud crash,” Elliott said. “We were over at our office. We have K Simon Construction over there and we were working in the back. Looked over here, to see the crane putting this AC unit on and it just fell and the whole thing just landed right straight on the building.”

PrimeTime officials said the unit was so badly damaged that it will be replaced. The crane was finally removed about two hours after the accident.

This is the second accident that has happened at that building, although the first accident occurred when a different company was working on it.

According to PrimeTime officials, no injuries were reported but it might push back the opening for the new addition. The building is 3,500 square feet and will be home to a new sports facility for indoor soccer and football leagues.Â This new addition is a separate building and does not affect the current PrimeTime facilities.

PrimeTime has been working on this project since May and hopes to have it completed by September. It is unknown if the accident will be investigated by the Occupational Safety and Health Administration.