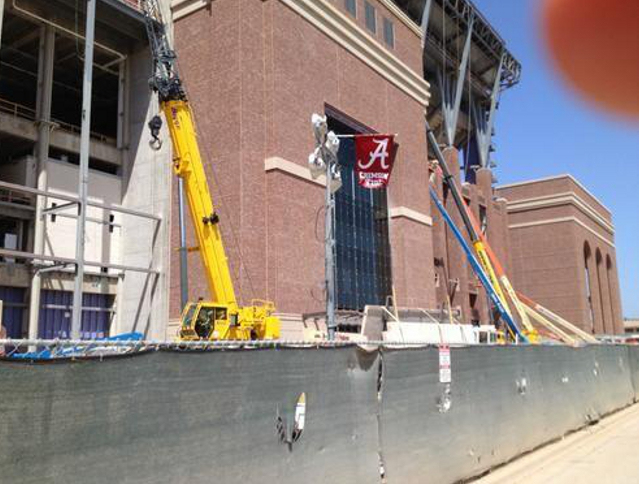 Â and expansion project at Texas A&M’s Kyle Field, may have cost him his job.

Bobby Livingston from Mobile, Alabama posted on his Facebook page Sunday, that he lost his job after he placed aÂ University

Â of Alabama flag on the side of Texas A&M’s Kyle field.

The picture went viral on social media with some of his Facebook friends supporting the gesture. Some Aggie and Crimson Tide fans chalked up Livingston’s action to a harmless joke. A friendly rivalry between teams. One Texas A&M student wasn’t amused. Alex Spear says, “This is one of the biggest things we’ve done in a long time (Kyle Field renovation. Now, one of our biggest rivals has their flag flying over our stadium. Not what you want to see.”

Livingston was apparently working for Derr & Isbell Construction, a subcontractor under Manhattan-Vaughn, the company expanding andrenovating

Â Kyle Field. It hasn’t been confirmed by Derr & Isbell if Livingston was fired for this action. News 3 attempted to contact the Derr & Isbell Construction in Euless, but has yet to hear from the company.