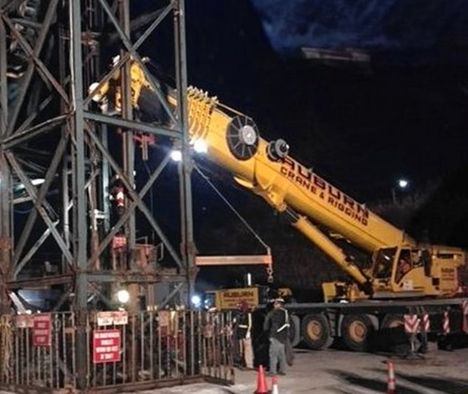 When 17 miners were stuck almost 275 metres down a lift shaft in Lansing, New York on Wednesday night they were eventually rescued by an All Terrain crane belonging to Auburn Crane and Rigging.

The men were heading down in the lift to work the night shift at the Cargill salt mine when the elevator malfunctioned and jammed. At around 11:30pm, after attempting to repair or recover the stricken lift, the mine management called the emergency services in.

A couple of hours later, after having surveyed the situation and considered all the rescue options in the freezing weather, the emergency services called on Auburn Crane president Steve Bilinski, awaking him at around 2:00am on Thursday morning. They explained the situation and asked for his help. He quickly realised that in order to reach the men they would need a crane compact enough to get into the space, but with a long enough hoist rope to reach them with a man basket.

Bilinski called one of his operators – David Smith, and rigger Scott MacIntosh, asking them to meet him at the crane companyâ€™s yard as soon as they could. They selected the companyâ€™s 220 tonne, five axle Grove GMK 5275 All Terrain crane – not for its capacity or boom length, but purely for the fact that it carries over 290 metres of wire rope on each of its two hoists. Adding the man basket to their truck they headed out to the mine around 30 miles or so away.

They were on site within an hour or so and then in place and ready to work 45 minutes later, after manoeuvred the crane close in under the elevatorâ€™s lift frame structure. The boomâ€™s fly section was telescoped slightly to position the hook centrally over the lift shaft.

The man basket was then lowered down the shaft, with a man and a radio, to the trapped elevator, which turned out to have jammed at around 250 metres so plenty of cable in reserve. The men climbed out through the roof hatch of the elevator car and into the man basket, the 10 minute ride to the top. The first men were brought to the surface at 7:30, with the last group around an hour later.

Today the company will return in order to recover the jammed elevator car. 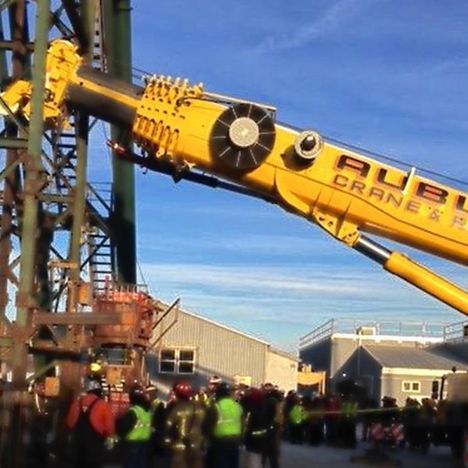 All miners were back on the surface by 8:30 – almost 10 hours after they were trapped

Construction in the sky: the high-rise crane crew