Construction in the sky: the high-rise crane crew 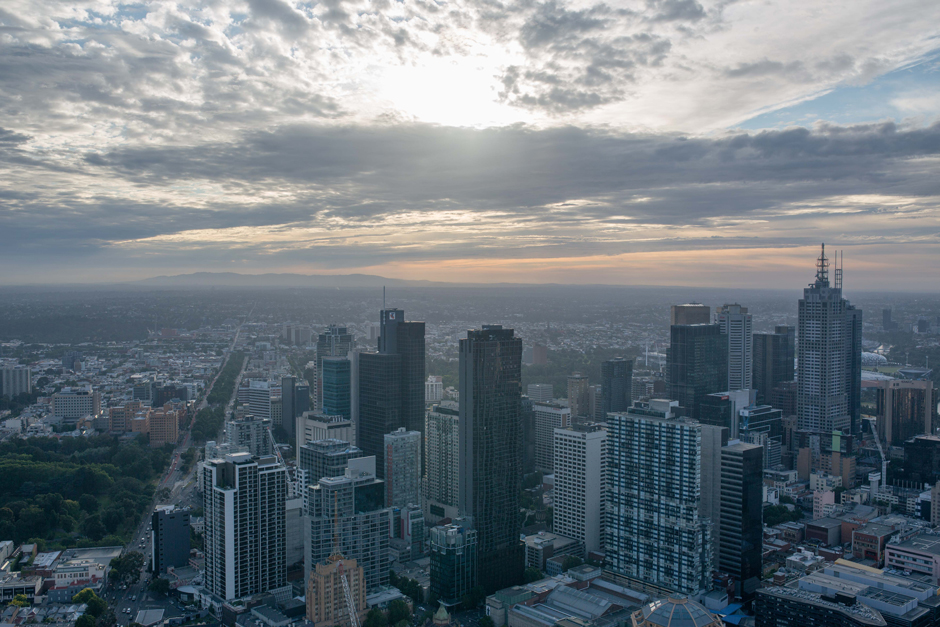 Step into the boots of a crane operator on top of one of Australia’s tallest construction sites. 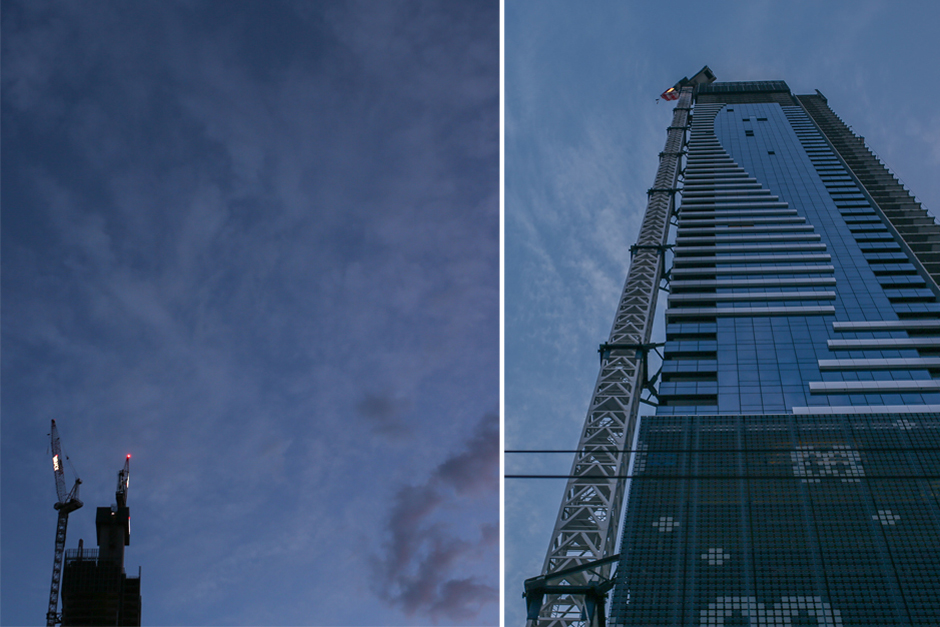 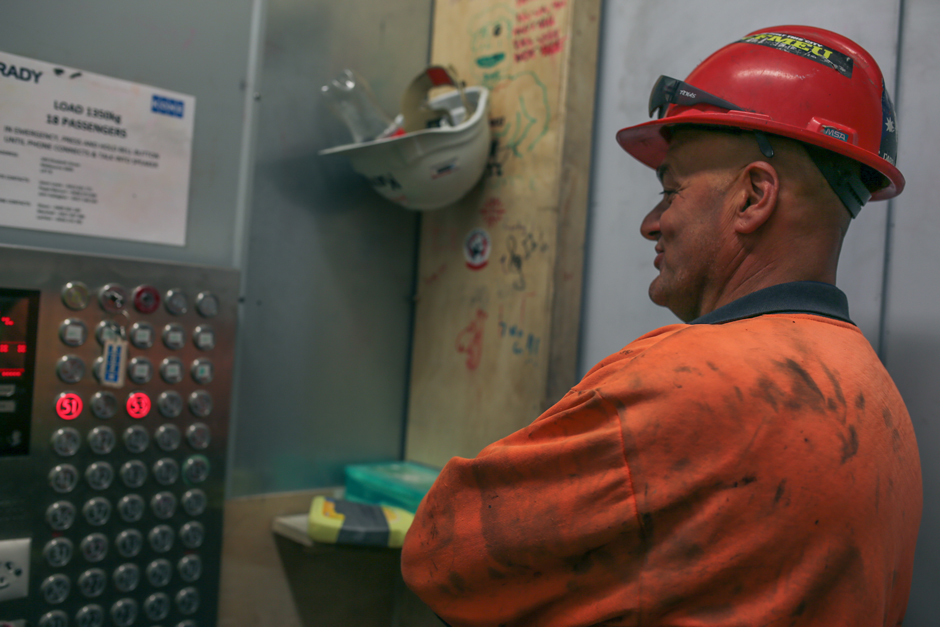 It’s 6:30am and the crane crew turn up at the tallest construction site in Melbourne.

They’re usually among the first workers on site, and last to leave.

Ray asks the lift operator to take him to the 53rd floor.

From there, the 52-year-old rides an external industrial elevator for another few storeys, and then another internal one to the 69th floor, the top of the building’s core.

When completed next year this apartment complex – located on Elizabeth Street near the Queen Victoria Market – will be 72 storeys (226m) high, making it one of the tallest buildings in the city. 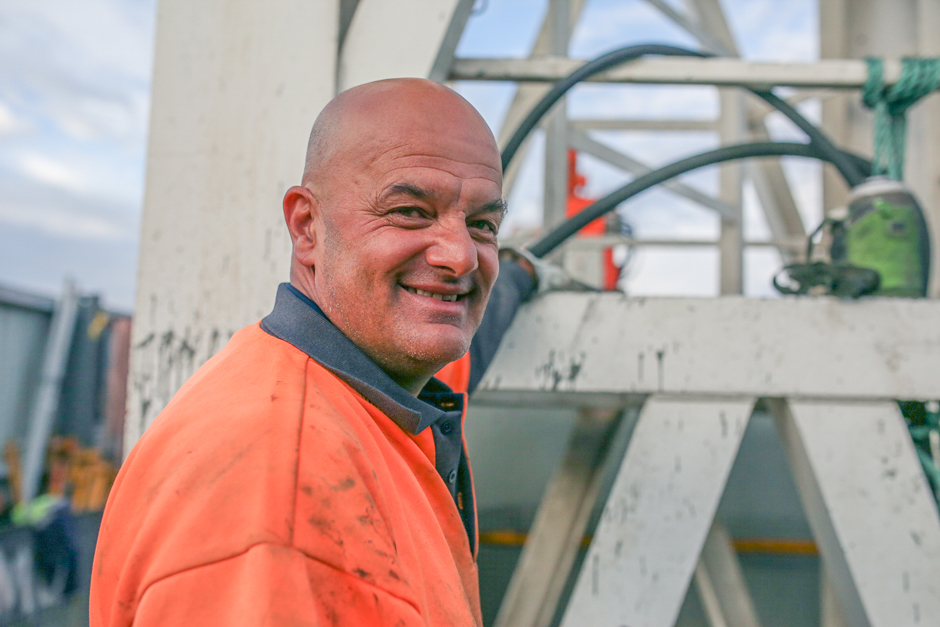 TOP OF THE WORLD

Two cranes are in operation on site.

The taller one is called an internal climber, lodged five storeys down into the centre of the building.

The other is an external climber, which means it’s fixed to the side of the building. That crane is used to dismantle and take down the other.

A four-person team usually works on each crane. 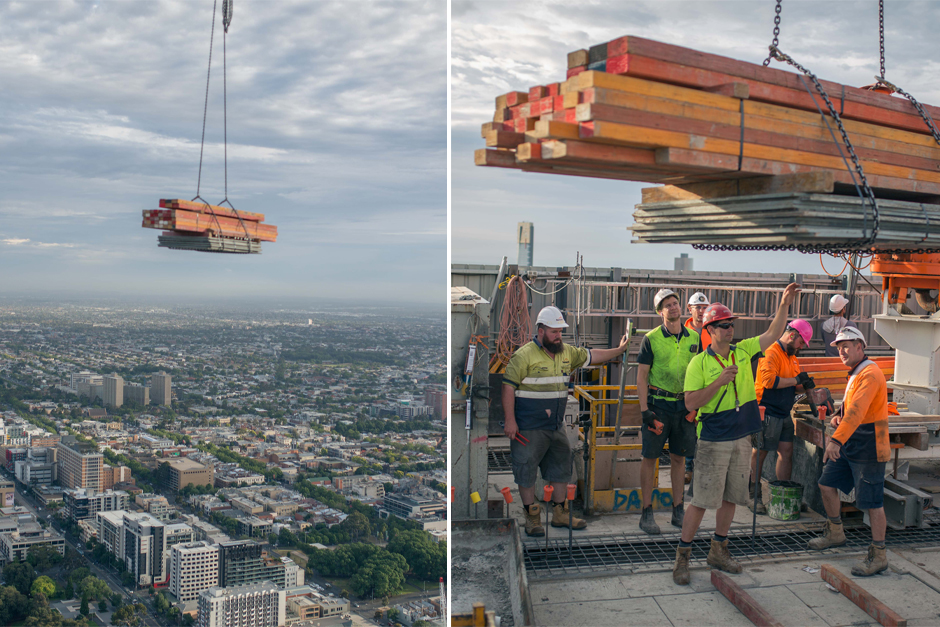 Most of them are qualified crane drivers and they take turns on the ground crew as dogmen, also known as ‘doggies’.

“You find out in the morning what your day entails, there’s a board,” Benny says.

“You could have a truckload of windows or the boys might be doing concrete panels.”

When Ray climbs the final ladder to the top on this particular morning, he finds that the crane has been tampered with.

There is grease on the door, which indicates someone has broken into the site and tried to get into the crane cabin. 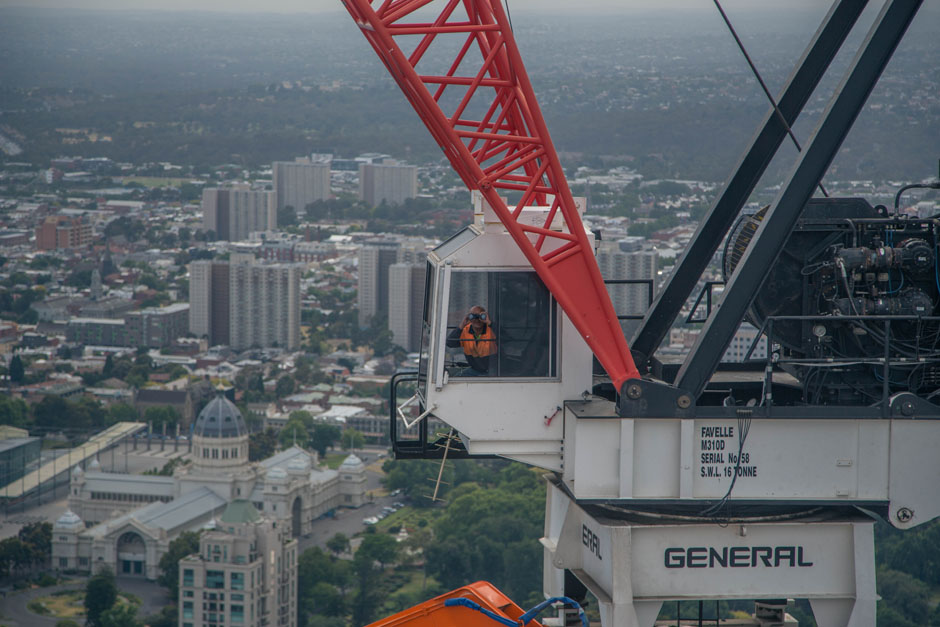 The crane crew are paid well for what they do. On some weeks they have the opportunity to make more than $4,000 before tax.

But that’s for a 60-hour week, taking into account overtime and allowances accrued as part of the CFMEU enterprise bargaining agreements.

Like many other construction jobs, their work is weather dependent, and can be called off when it rains, when temperatures reach 35 degrees Celsius, or if it’s windy. 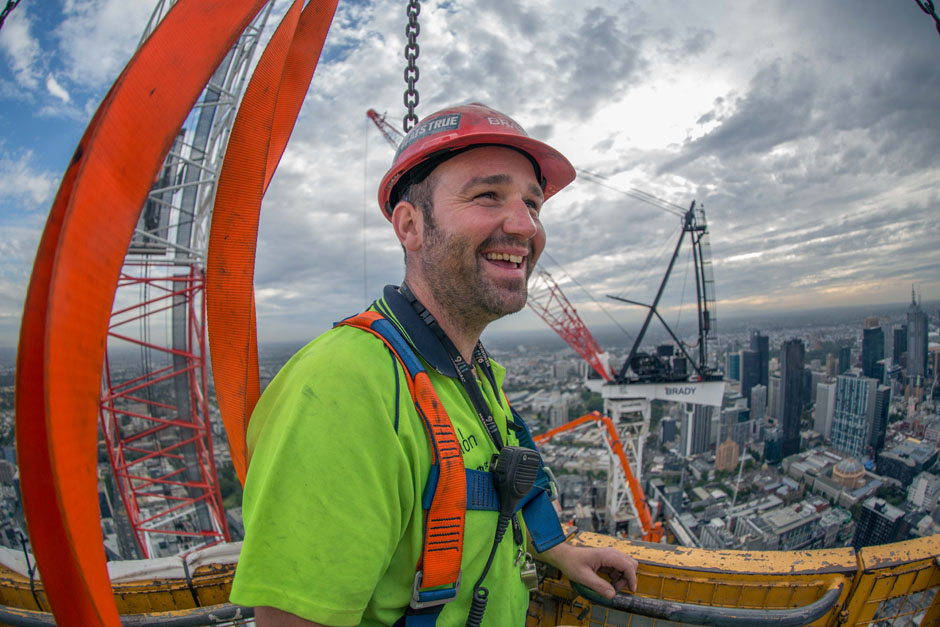 It can also be risky work.

The crane itself, excluding the towers, weighs 100 tonnes, and they’re lifting loads of up to 16 tonnes.

In this job, trust in their fellow team members can mean a matter of life or death.

As a crew they also bear the responsibility of keeping the people below safe.

They tell them when it’s clear to lift, and guide them to the other doggie, who is waiting for the load up above.

“If you’re not confident it makes it hard, especially when you can’t see,” Ray says.

“Especially now because both cranes are so high, the core crane is in the blind probably 90 per cent of the time, so we can’t see anything,” Damo adds.

“If you’re out in the street in the blind, and the doggie hooks something up and it goes up and hits the building or comes out, it’s really the doggie’s fault.” 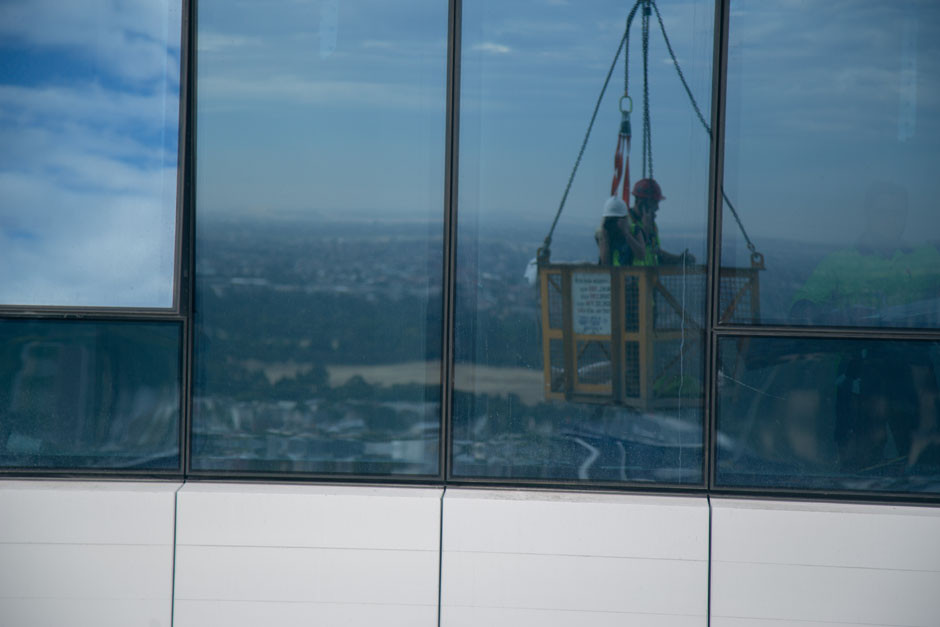 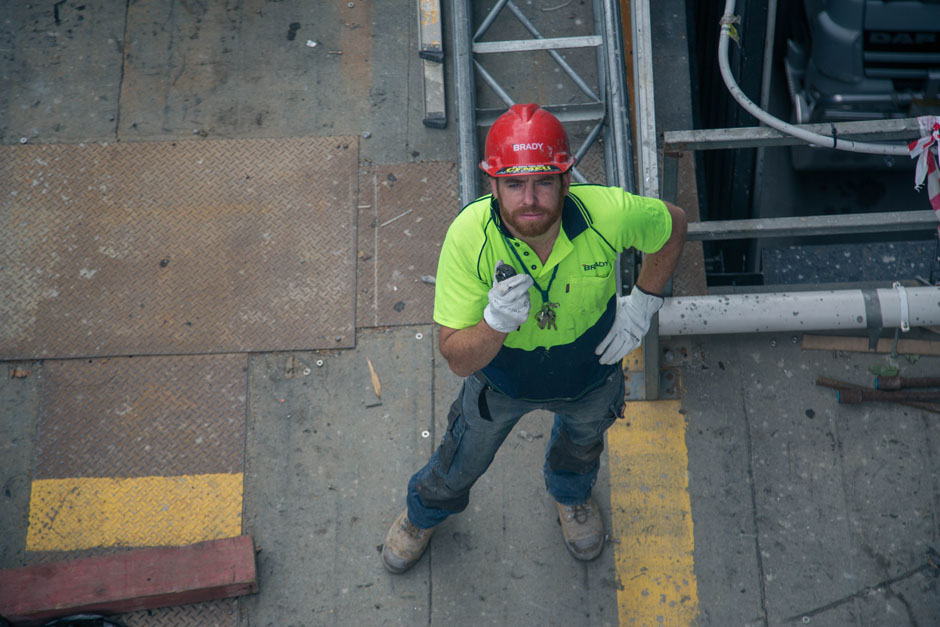 It’s 8:50am. As Ryan awaits a lift, Ray’s voice blares through the radio. He’s talking about what he’s going to eat at smoko.

He starts another sentence and Ryan quickly covers the speaker and laughs.

Today they’re on their best behaviour, but they admit that most of their communication wouldn’t make the PG rating.

“This is what we do, we take the mickey out of each other all day,” Ryan says.

Especially for the driver who spends most of the day alone in the cabin, aside for two breaks. 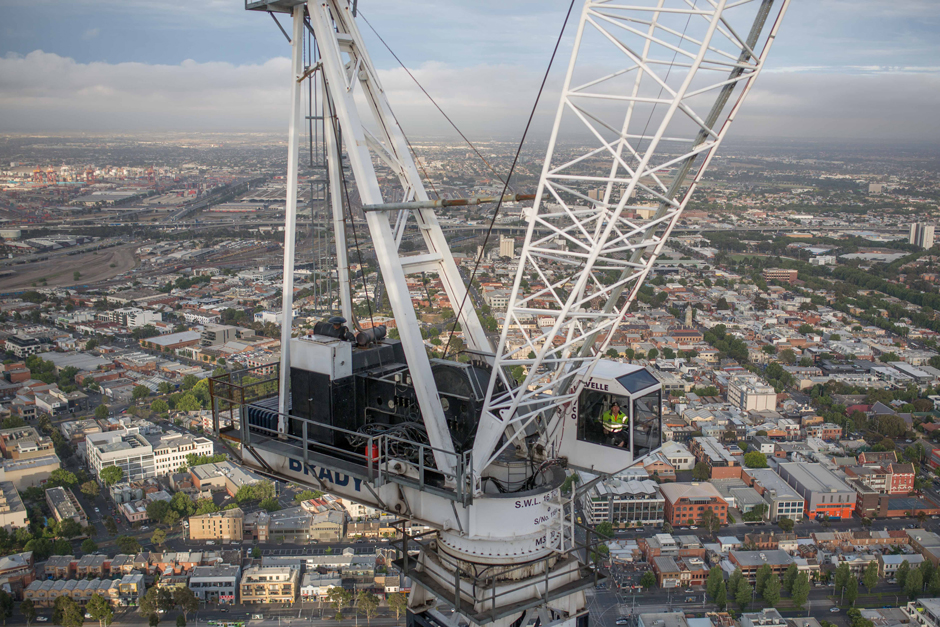 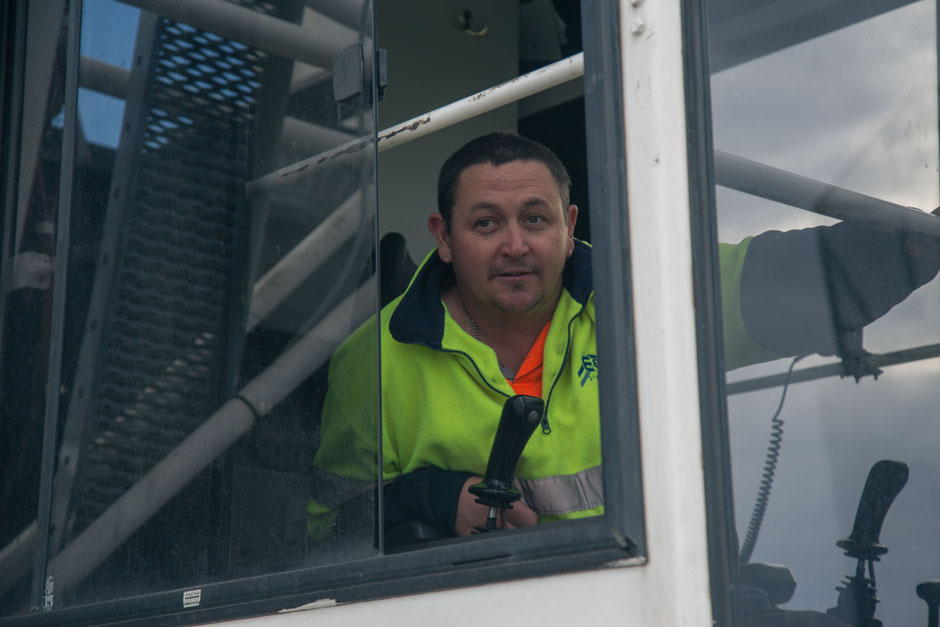 So what happens if a crane operator needs a toilet break in between? 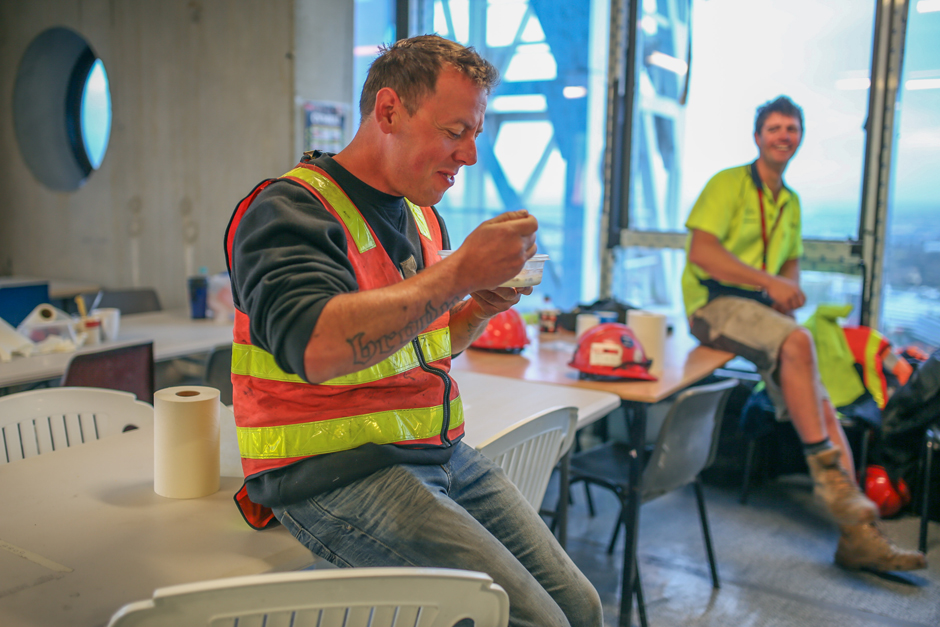 Skyscraper construction workers get some of the best views of the city, and often through the apartment windows of unsuspecting residents.

“We have seen lots of hot air balloons go across the top of the cranes,” Benny says.

“The boys have seen a few things that they shouldn’t have over the years, and a lot of them could not be told.”

These men know that most people walking on the streets below, and even their families, have little idea about what is involved in their day.

And while they have minor grumbles like most people do about the daily grind, for the most part, they seem to enjoy their work.

“I haven’t been doing it for as long as these guys,” Ryan says. “But it’s been one of the best jobs going around. You’re working with your mates, the views…”

Another outburst of infectious laughter ensues.

Construction in the sky: the high-rise crane crew was last modified: January 11th, 2016 by Ron Selby