Crane operators vie in crane rodeo, where safety is king, trips to Vegas are prize 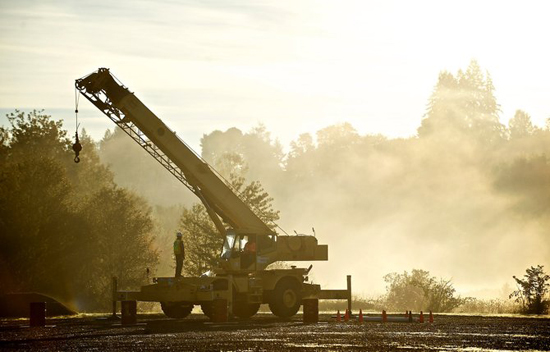 Examiner Alex Faris sits in the cab of a crane while an instructor stands nearby. The two men were preparing the heavy equipment for Saturday’s regional Crane Operator Rodeo competition at Industrial Training International in Woodland.

Stever Frein answers the cheers of supporters — calling themselves “Stever’s Believers” — after competing in a regional Crane Operator Rodeo competition, hosted on Saturday by Industrial Training International in Woodland. He competed first, then watched to see if the rest of the field could cut him out of a trip to nationals.Buy this photoÂ Photo by Zachary Kaufman

At the Crane Rodeo, the action moved at a snail’s pace.

Stever Frein, an instructor for West Coast Training in Woodland, was first to hop in the telescoping boom crane during the competition on a foggy Saturday morning.

Whether he would win one of two available trips to the 2014 National Crane Operator Rodeo Championships in Las Vegas depended on how smoothly and swiftly he could maneuver the towering machine during such descriptive events as “Place Ball in Drum” and “Stand and Move Pipe.”

Think how tricky it is to grasp a stuffed animal with one of those grocery store claw machines. Now imagine that on a monumental scale.

It’s the first time the Crane Institute Certification company and Maximum Capacity Media have held one of their qualifiers in this area. Industrial Training International hosted the event at their Woodland facility, where simulated construction accident scenes â€” complete with “bodies” â€” serve as grisly reminders of the true nature of the event, to highlight the intensive training needed to work such complicated, and potentially deadly, machines.

Extreme caution is probably not what you’d first expect from something called a “crane rodeo.” But safety â€” above all else â€” was the name of the game.

Frein’s supporters â€” calling themselves “Stever’s Believers” â€” whooped it up as he kicked off the first round by hooking a 55-gallon, water-filled metal drum and using the towering crane’s controls to carefully weave the hulking metal behemoth in a serpentine pattern around other barrels. If the drum knocked into anything, he’d be penalized, the same if he raised the crane too high or too low.

He was a little rusty; it’s been 12 years since the teacher has done that type of work regularly. But Frein and the other competitors â€” pros from around the Pacific Northwest â€” were up for the task. Cranes are their livelihood, after all.

“Teaching is just not the same,” said Frein’s wife, Janet, who passed the time by knitting. “He’s all pumped up about doing this.”

But Frein wasn’t thrilled when he stepped down from the machine.

“I think I looked pretty bad, I’ll tell you the truth,” he said as Janet wrapped her arms around him. “But it was fun,” he added, punctuated by a hearty “Ha!”

“We would be proud of him no matter what,” said Frein’s son Nate, a graduate student studying biology at Washington State University Vancouver. Nate’s 3-year-old Iasem was nearby, following his grandfather’s lead by picking up rocks and placing them in orange plastic safety cones. “Can cranes reach higher than people?” he asked.

There was camaraderie among crane operators, even though they were trying to top one another.

Portland-based manufacturer Sulzer Pumps sent two contenders: Material Handling Supervisor Jeff Ellis and his subordinate Kevin Parrish. They came as a lark, but that doesn’t mean there won’t be some chest puffing come Monday from Parrish, who bested his boss in both time and precision. “I let him win,” Ellis joked.

“On a job site, bragging rights are worth a lot,” said Sulzer Pump’s Kurtis Hammersteadt.

At first Frein was modest about his performance, but as the events went on, it seemed his 850 score wouldn’t be beat.

That was until Andrew Seid, who flew in from Idaho for the competition, blew everyone away with 395 points. A lower tally meant there were fewer mistakes, and Seid’s incredibly low score proved insurmountable.

Frein, who uses a crane for “15 minutes a month” at most, ended up ranking second under Seid, enough for an invite to Vegas in March. There were a few hiccups during Frein’s performance, but the steady hand and instincts he developed in decades on the job served him well.

Crane operators vie in crane rodeo, where safety is king, trips to Vegas are prize was last modified: October 15th, 2013 by Ron Selby