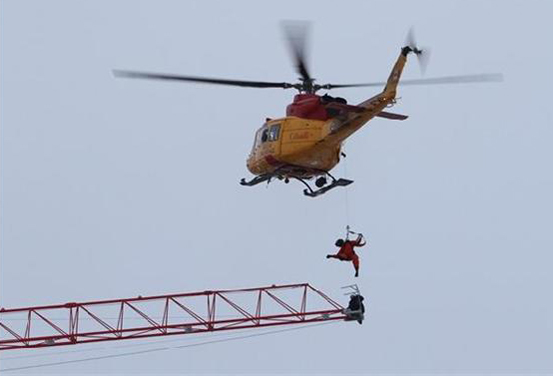 KINGSTON, Ont. – In a dramatic rescue Tuesday that drew a gasping crowd, a military helicopter swooped in to airlift a worker trapped on a construction crane above a massive fire in Kingston, Ont.

Police said the crane operator suffered only minor injuries after being stranded when the blaze broke out around 2:15 p.m. at an apartment building that was under construction.

John Ashie was working at his family’s car dealership down the street when his father asked him about the black smoke that was rising above the neighbourhood.

The 22-year-old stepped onto the street just in time to see bright orange flames burst through the roof of the five-storey apartment complex that takes up at least one city block.

A search and rescue helicopter lowers a worker to rescue a crane operator during a fire in downtown Kingston, Ont., Tuesday, Dec.17, 2013. THE CANADIAN PRESS/Lars Hagberg

Not long after, those who had gathered to watch fire officials battle the blaze noticed a figure perched atop a construction crane at the burning apartment complex.

“He actually had to get out of the little booth he was in and walk across the entire length of the crane, which would have been frightening enough,” said Ashie. “He had to sit on the edge of the crane, and about 15 minutes later the flames were so big they were going up above the crane.”

There were a few anxious moments as those on the ground watched the fire continue to grow.

A Griffon helicopter deployed from CFB Trenton plucked the worker from the crane at 3:35 p.m. and took him to a waiting ambulance. Police said all the other construction workers at the site are believed to be accounted for.

The entire episode was like something out of an action film for some of those who watched it unfold.

“Especially when the helicopter guy was rescuing him from the crane, everyone was like, ‘Oh my god! I can’t believe this is happening it’s just so surreal,'” said Ashie, adding that as the building at the centre of the blaze was destroyed, observers heard a series of blasts as propane tanks on the site blew up.

Another worry for officials as fire crews fought the flames was a concern the blaze could spread to nearby buildings, including a hotel and a gas station.

Police went door-to-door advising residents to evacuate and at least one home near the burning building caught fire.

Observers also saw flames leap across a street to structures on the other side.

“When the building was up and the fire was still burning, some of the signs, like the billboards on buildings across the street, were catching fire,” said Darryl Spring, program director at radio station K-Rock 105.7.

Spring said the heat from the fire was intense and despite a -28C wind chill “my face was hot from being that close to it.”

Utilities were shut down in the area to make it safe for those battling the fire and there were fears the crane was structurally unsound and might topple.

Meanwhile, city buses were pressed into service to shuttle residents who lived within a few blocks of the blaze to an evacuation centre.

Police said they’ll be advising residents when they can re-enter the evacuation zone for pets or other items.

The blaze was brought under control around 5:45 p.m. but, according to police, crews were still busy dousing hotspots.

â€” By Diana Mehta and Peter Cameron in Toronto.

Crane Flips Over, Damages Dock in Sea I