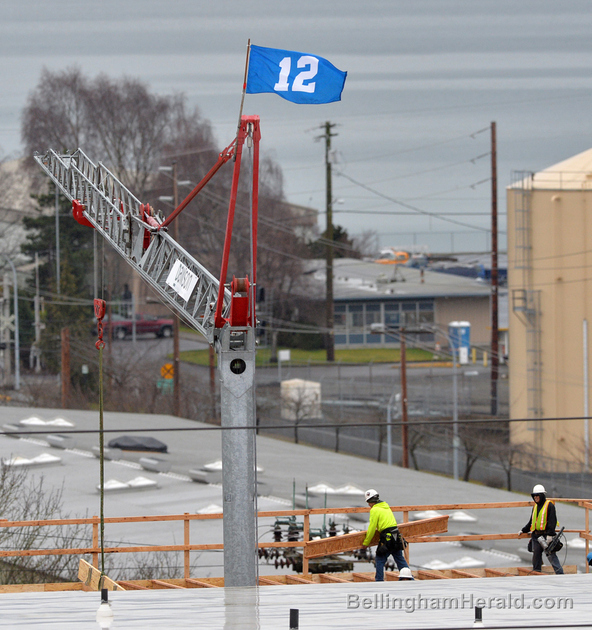 BELLINGHAM – The 12th Man is making its presence known in downtown Bellingham as the Seattle Seahawks prepare for the upcoming home playoff game against the New Orleans Saints.

In 2008 Whitener was working at a hotel construction project in Bellevue, just off Interstate 405. One day a group of Sea Gals cheerleaders pulled up in a van unannounced and asked Whitener if they could hoist the flag on top of the crane.

“It was a complete surprise that they showed up,” Whitener said. “I guess it was some sort of promotion they were doing.”

As one might expect, the construction crew was distracted by the arrival of the Seattle Seahawks’ cheerleaders and work grounded to a halt while the flag went up. Whitener was allowed to keep the flag after it was taken down, and at the suggestion of current co-workers, decided to put it on this crane in Bellingham.

While this may be the highest-flying 12th Man flag in Whatcom County, it’s far from the only one. Seahawks fans are decorating homes, yards and themselves in a blue-and-green frenzy for what they hope will be a run to the Super Bowl. Seattle hosts New Orleans on Saturday in a divisional round playoff game.

The crane flag is expected to remain up over the construction project during the Seahawks’ playoff run. The crane is helping build two five-story apartment buildings at 1010 and 1020 Railroad Ave. Each building is expected to have 60 apartment units.

Getting the flag up wasn’t difficult and isn’t interfering with work, so it didn’t take much convincing for Rick Westerop, who is the project developer.

“It’s kind of cool to have something positive to rally around,” Westerop said.

Are you Whatcom County’s biggest fan? Submit a photo to our Seahawk Pride contest for a chance to win a $100 gift card. Go toÂ bellinghamherald.com/contestsÂ to enter. Entries will be accepted through Jan. 30, or one day after the final Seahawks game of the 2013-2014 season.