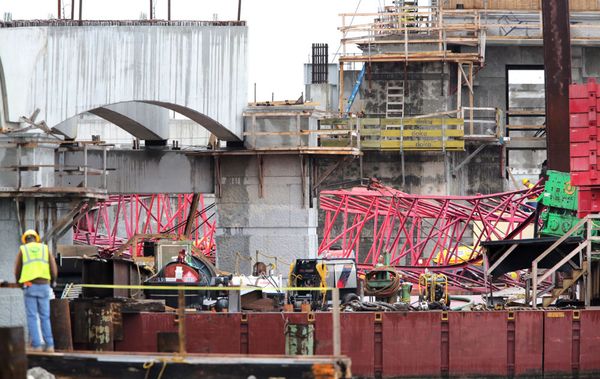 A section of a large crane that was working on the Flagler Bridge lies on a barge in the Intracoastal Waterway after it collapsed Wednesday morning, January 6, 2016. According to WPTV Chanel 5, West Palm Beach Fire Rescue said no one was injured and no fuel spilled when the crane fell onto a barge. No traffic is being affected.

A crane collapsed onto a barge near the Flagler Memorial Bridge on Wednesday morning, but the crane operator was uninjured, West Palm Beach Fire Rescue reports.

The crane failure happened just before 9 a.m. on the west side of the Lake Worth Lagoon, said Tish Burgher, spokeswoman for the bridge replacement project.

The crane never landed in the water and the operator was able to get out without injury, fire rescue spokeswoman Diana Matty said.

Although there were workers in the area, none was injured, Matty added.

The crane collapse caused no damage to the existing or replacement bridge, Burgher said.

Eastbound traffic on the bridge was shut down for 30 minutes, then reopened at 9:15 a.m.

The Flagler Memorial Bridge project began in 2012 and is expected to last until 2017.