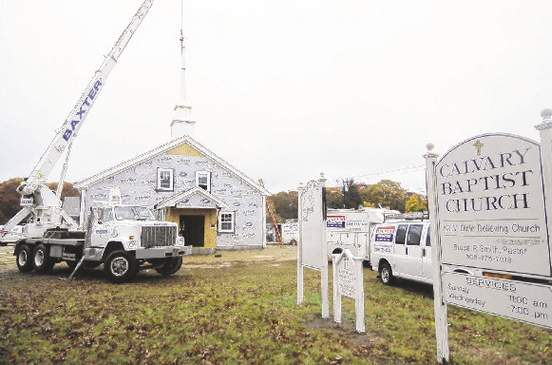 “It’s a crowning moment,” said Scott Jones, project manager for Emergency Contractors, which is leading the work to replace the original church that was destroyed in a fire almost two years ago.

Video HereÂ this is kind of a snoozer…

The bright fiberglass steeple, which weighs only about 500 pounds, was hoisted to the church’s new peak in two pieces by a crane operated by Douglas Shea of West Yarmouth-based Baxter Crane and attached with 24-inch bolts by Meagher Construction Inc. workers Michael Meagher and Michael Robbins.

The rain-soaked workers took about a half-hour to get the steeple in place.

“It looks like a church now,” said Bobby Lomba of Emergency Contractors.

Recent progress has been fast and furious at the church, which went from a concrete slab to a fully framed, roofed and now steepled building in about two months.

The final steps of the current phase of construction are to cover the exterior walls with siding and to install doors, which could be done within about three weeks, Jones said. 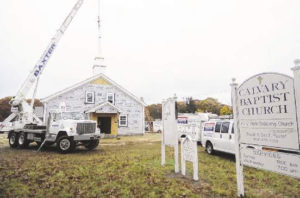