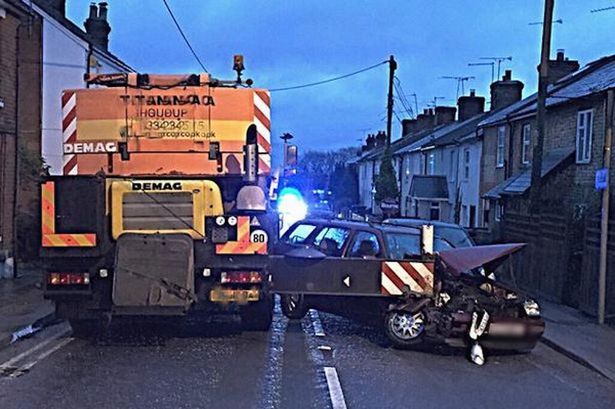 A father cheated death after a crane leg malfunctioned and tore through the side of his car – missing his head by inches.

Part of the mobile crane sprung out in front of James Liddiard, 32, on an unlit road in the early hours of January 30.

He was then sent flying into two other cars and a set of traffic lights, reports Get Surrey.

â€œAll of a sudden there was a bang, the air bags came out and the car spun three or four times,â€ said Liddard.

â€œThatâ€™s when I realised the door was missing.

The craneâ€™s owner has vowed to find out what caused it to malfunction so dangerously.

Mr Liddiard, who has a 15-month-old daughter and whose wife is 14 weeksâ€™ pregnant, said he had been left with bruising and pain.

â€œI am immensely grateful to have walked away with no permanent physical injuries to return home to my family,â€ he said.