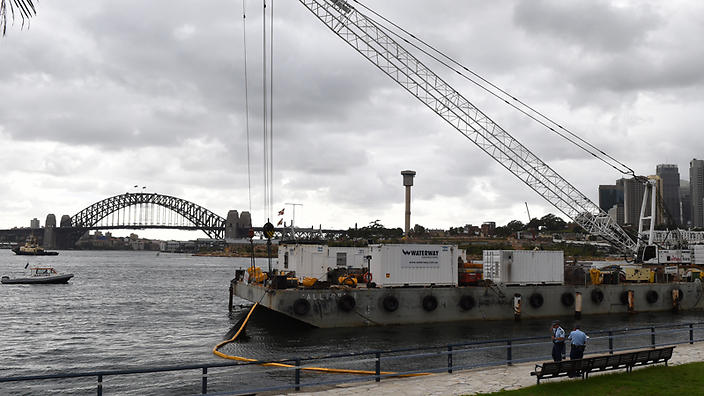 A teenager who died after climbing a tall crane off a wharf in Sydney Harbour has been remembered as a “top bloke” who lived life to the full.

Young, Dumb and Drunk Carl Salomon, 19, climbed the crane on a construction barge in Balmain East, in Sydney’s inner west, on Thursday morning before he fell or jumped into the water.

His body was found just before 9am.

“Carl was obviously one of our best friends and a top bloke,” his friend Marcus Atallah said.

“He probably enjoyed himself the most out of anyone I know – that’s the way we want people to know him.”

Police believe Mr Salomon and a friend had been drinking and “skylarking” before they swam out to the barge before 5am and scaled the 30-metre high crane. It’s unclear if Mr Salomon, a university student, jumped or fell from the crane.

His friend spent 10 minutes swimming around the wharf in a desperate attempt to find Mr Salomon but raised the alarm with neighbours when he couldn’t find him.

It is believed Mr Salomon lived around the corner from where he lost his life.

A stream of grief-stricken friends have visited the wharf, consoling one another and laying flowers.

Friend James Smith remembered his mate as “a legend and nicest person you would ever meet”.

Mr Salomon was about to move into student accommodation at St Paul’s College at the University of Sydney.

Friends say the keen rower and volley ball player had just sealed a job as a “model/waiter” – an affectionate jibe at Mr Salomon’s good looks.

“He was a bit of a ladies’ man,” his mate said jokingly.

Acting Inspector Alex Barrell said it was a tragedy that could have been avoided.

“This is just a case where it appears that sky-larking with some alcohol involved has led to the tragic death of a 19-year-old male.”

A teenager died after falling 30 metres from a crane into Sydney Harbour was last modified: February 5th, 2015 by Ron Selby