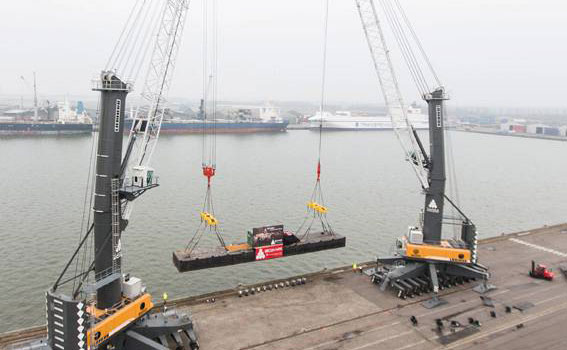 In January 2015, both family-owned companies Katoen Natie und Liebherr celebrated the handover of the strongest Liebherr mobile harbor cranes (LHM) on Antwerpâ€™s Left Bank in a festive ceremony. Ordered twice by Katoen Natie in 2014, the LHM 600 model is the strongest mobile harbor crane available in the market and provides a maximum lifting capacity of 208 metric tons and an outreach of up to 58 meters.
The first LHM 600 was delivered fully assembled in November 2014, and the second crane became operational just one month later. Due to this investment in two LHM 600s, Katoen Natie can offer high-capacity tandem lifts to its customers. Thanks to the installation of Sycratronic, one crane operator can safely handle heavy loads of up to 416 metric tons in tandem operation. 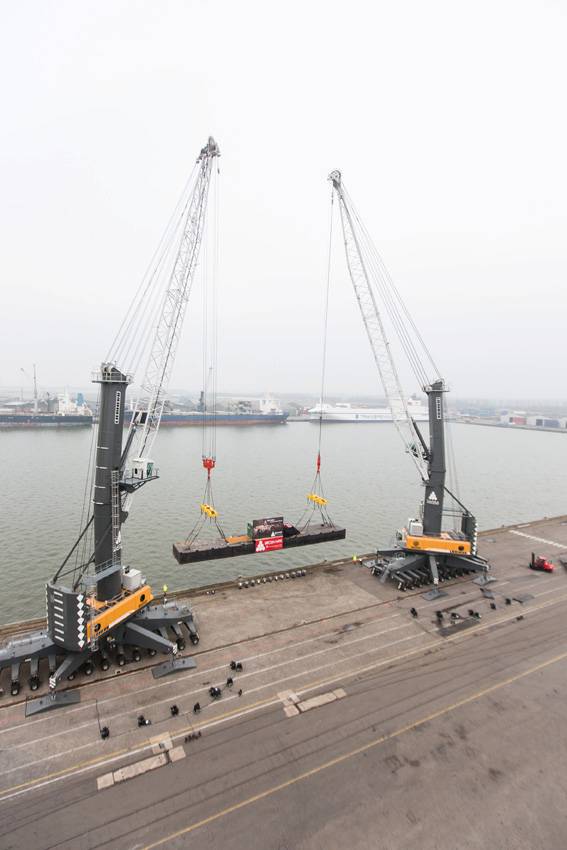 Manufactured by Liebherr Maritime Cranes in Rostock, these cranes aim to increase Katoen Natieâ€™s competitiveness in break bulk cargo, including steel and forest products. This investment also demonstrates Katoen Natieâ€™s confidence in their operations in Antwerp, also showing its focus on the expansion of the market share for heavy lift and project cargoes, which are large, nonstandard pieces like wind turbines.
â€œThanks to our two new LHM 600s we have expanded our portfolio and are now capable of lifting loads as heavy as 416 metric tons, which is unique in Belgium. We are very optimistic that these state-of-the-art giants in combination with our long-term experience in safe and efficient cargo handling will attract new customers. Our existing customers will also highly benefit from this significant investment as we have speeded up our vessel turnaround times,â€ said Joos Melis, Commercial Director of Katoen Natie.
In addition to both LHM 600s, Katoen Natie has invested in an LHM 550, which started operation in summer 2014. The LHM 550 is the most-in-demand Liebherr mobile harbor crane model and has proven its capabilities across the globe. Katoen Natieâ€™s new machine is equipped with the unique Pactronic hybrid power booster. This cutting-edge hydraulic hybrid drive for cranes allows for a plus of 30% regarding turnover capacity. At the same time, Pactronic leads to a reduction of fuel/energy consumption (litre/ton) as well as CO2 and exhaust emissions in the range of 30% depending on the operation. The tasks of this new LHM 550 in Antwerp include container and bulk handling.
Antwerp has been a market for Liebherr mobile harbor cranes for more than 20 years. In 1990, the first unit was delivered to Westerlund Corporation in Antwerp. In 2009 Liebherr Maritime Cranes opened a new office in Antwerp, and today there are eight service engineers based in Antwerp, to ensure quick response times and excellent service. Due to a notable market growth in recent years, Liebherr is optimistic that the demand for state-of-the-art mobile harbor cranes will further increase in Antwerp.
In addition to its investment in Belgium, Katoen Natie has opted for another Liebherr mobile harbor crane, type LHM 420, for their facilities in Radicatel at the northern coast of France. Delivered in 2014, the new all-purpose crane will be used for general cargo operation, container and bulk handling. The LHM 420 is Liebherrâ€™s latest model, providing an outreach of 48 meters and a maximum lifting capacity of 124 metric tons. Katoen Natieâ€™s very positive experience with an existing LHM 250 in Radicatel was a main reason why the logistics company opted for another LHM. This LHM 420 delivery underlines the positive trend of demand for Liebherr mobile harbor cranes in France.
Liebherr Crane Quartet for Katoen Natie was last modified: February 10th, 2015 by Ron Selby

All Erection installs key piece of equipment at the Vadxx plant