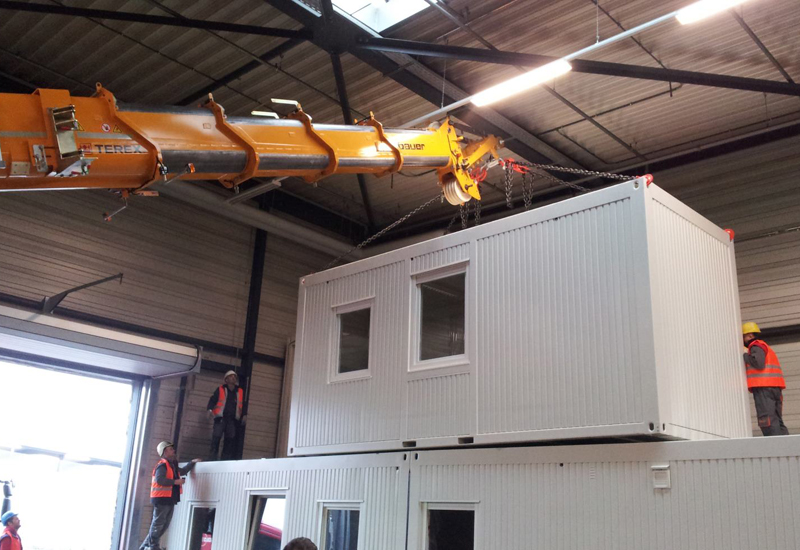 The versatile Terex unit was enlisted to lift 16 containerised offices inside the building. However, the lack of workspace was not the only challenge; the crane also had to complete the job during a single Saturday to avoid disrupting other production work taking place at the warehouse.

â€œThere werenâ€™t any viable alternatives to begin with â€“ no other crane had the design characteristics required to handle the job,â€ said Christian Schlagbauer, branch manager at Schmidbauer Groupâ€™s Ingolstadt office.

In order to complete work at the restricted site, Schmidbauer mounted a runner with the maximum possible offset directly onto the craneâ€™s main boom. The team also decided to forego the hoist rope, using swivel hooks instead. This made it possible to attach chains to all four corners of the 6m-long, 2.5t containers, and then lift them within a radius of just 10m.

â€œWith this configuration, I was able to bring the upper containers to the required height and then set them down on the lower ones without running into the ceiling structure or into any lighting fixtures or pipes,â€ commented Schmidbauerâ€™s crane operator Steffen Jaenecke.

â€œAfter just 10 hours, all 16 containers were where they needed to be,â€ he added.

The Terex AC 40 crane is the most compact unit in the 40t-capacity City series, making it particularly well suited to operations in constrained spaces. The modelâ€™s overall height makes it possible to cope with clearance heights as low as 2.99m.